A massive brawl erupted between Israeli troops from two different training companies over who was going to eat first at the canteen. Some 21 soldiers were injured in what the IDF called an “unusual and serious” incident.

The confrontation between training companies representing the Bedouin 585th reconnaissance unit and the Shaked Battalion occurred at the Har Keren training base on Sunday.

Things became so heated in the fracas that one of the troops even started loading his gun, according to one witness who was cited in local reports.

The brawl lasted several minutes and involved around 30 people – some 21 of whom were injured in the altercation. The majority of the soldiers were treated on site, but eight required hospitalization with light injuries.

The Israel Defense Forces said in a statement that the brawl was “an unusual and serious incident” and one which is “inconsistent with the IDF’s values ​​and [the] behavior required from the soldiers.”

An investigation by the force revealed that the troops got into an argument in the queue for the canteen, with things swiftly getting out of hand due to the “failure of the entire chain of command.”

And it didn’t entirely end there – two of the injured soldiers fought each other while seeking treatment at hospital, but were quickly separated, the IDF said.

Both companies have been suspended from training in the wake of the outbursts. Instead, they’ll be attending classes on the IDF’s values and accepting fellow servicemen, after which they’re expected to spend an evening together in the presence of the commander of the base in order to reconcile their differences.

Both the soldiers and their commanders – who failed to prevent the fight or swiftly end it – will face strict punishment, the IDF said. 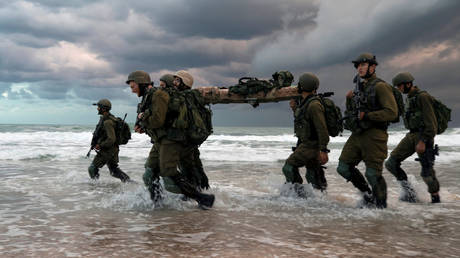 Nightingale hospitals in the North...