2020 stuck in time loop: Jokes fly as North Korea’s Kim Jong-un reported to be in a coma… again

2020 stuck in time loop: Jokes fly as North Korea’s Kim Jong-un reported to be in a coma… again

The North Korean leader’s health is back in the spotlight, with Western media repeating a claim that Kim Jong-un is in a coma. He’s probably just faking it to avoid watching the Republican National Convention, skeptics joked.

The recurring story about Kim Jong-un being dead or incapacitated is one of the most enduring in the foreign coverage of North Korea. Just this April, he was declared to be no longer in power after an alleged botched surgery, but later on, Kim inconveniently popped up on film launching a fertilizer plant.

The latest round of rumors comes courtesy of South Korean politician Chang Song-min, who weighed in on the news of a possible restructuring in the North Korean government. The news came last week from South Korean intelligence, who said they believe Kim had given more authority to his aides, including his younger sister, Kim Yo-jong.

According to South Korean press, Chang said on social media that his source in China was sure that Kim was actually in a comatose state. The claim was picked up by international media, though they couldn’t agree on whether Kim’s sister is now the next in line to take the reins.

According to North Korean media, the supreme leader was chairing a party event last week, but Chang insisted the published photos were fake.

Commenters on Twitter responded to the reports of Kim’s health problems with a great deal of sarcasm. Some added up all the times he has been buried by the media so far.

How many comas has Kim Jong-un suffered this year alone? Now, how many commas? https://t.co/NFDJE6SpSE

Others suggested the rumor could have been deliberately planted by Pyongyang to explain why he wouldn’t be watching his old pal Donald Trump delivering his nomination acceptance speech this week. One took the opportunity to call dibs on a nickname for his sister in case she actually inherits power.

North Korean leader Kim Jong-Un is reportedly in a coma.

Alert doctors suspect that he’s faking in an effort to avoid having to watch the RNC this week.https://t.co/UnQBWugDiq

I want the historic record to reflect that if Kim jong-un dies and his sister rises to power(sehe won’t), I coined the nickname “Hello Kimmy.” pic.twitter.com/KSUG1rnwql

There were also some predictions of future media rumors about Kim’s health. Outlandish reports about North Korea never seem to go out of style.

BREAKING: North Korean Leader Kim Jong-Un Reportedly Slipped On A Banana Peel While Carrying Stacks of Plates In A Chique French Restaurant And Slid Straight Into A Broom Closet Where A Mop Fell On Top Of His Head And Then Everybody Laughed At Him Really Really Hard Sources Claim

Just last week, Kim was accused of ordering his people to hand over their pet dogs to posh restaurants. The alleged directive came because keeping dogs at home is “decadent and bourgeois,” while eating them is a time-honored part of Korean culture, especially during food shortages, according to reports. 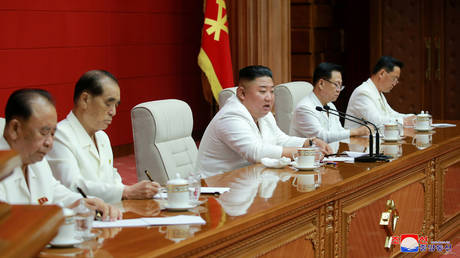