2% GDP mark is inaccurate, Germany claims, after sparring with Trump over cost of running NATO

2% GDP mark is inaccurate, Germany claims, after sparring with Trump over cost of running NATO

In a new twist, Berlin has suggested that a country’s commitment to NATO be measured by the proportion of its armed forces allocated for the alliance’s needs, not by the well-worn rule of spending two percent of GDP on defense.

The customary rule, fiercely adhered to by the Trump administration, is no longer an accurate way to assess each country’s individual contribution to NATO, German Defense Minister Annegret Kramp-Karrenbauer argued on Friday.

She dismissed the two-percent benchmark as “a cipher” that is losing relevance, given the damage the Covid-19 crisis has inflicted on NATO members’ gross domestic product (GDP) and proposed using other measurement methods instead.

As a matter of fact, “a higher percentage can be achieved without de facto [investing] more money into defense,” Kramp-Karrenbauer said, as cited by Der Spiegel. By 2030, the German military will be ready to make roughly 10 percent of its strength available for NATO operations, she pledged. The minister stopped short of explaining how many troops or weapons systems would make up the ten percent in question, however.

Somewhat muddying the waters, she said “that we will also benefit from 90 percent of the capabilities that others make available.”

Other government officials clarified the concept later in the day. The two-percent threshold “isn’t a sufficient indicator, given the Covid-related decline in GDP,” Parliamentary State Secretary Peter Tauber explained to local media.

“The Federal Defense Minister emphasizes Germany’s provision of ten percent of the [military] capabilities of the NATO alliance,” he explained. The alternative indicator, he said, “makes military capabilities more measurable and more effective.”

However, drifting away from the two-percent standard may not sit well with US President Donald Trump, who repeatedly insisted that the privilege of hosting US troops comes at a price. He pressured NATO members into meeting the target, singling out Germany in particular.

That nation, in his view, was benefiting from American troop presence while spending very little on the common NATO cause. Berlin has finally agreed to beef up its military budget and meet the spending target by 2031, but the spat produced more cracks in its defense ties with Washington.

Earlier, the US confirmed the withdrawal of roughly 10,000 troops from Germany, with Trump himself announcing that some service members will redeploy to neighboring Poland and other locations across Eastern Europe, while the rest will return home. 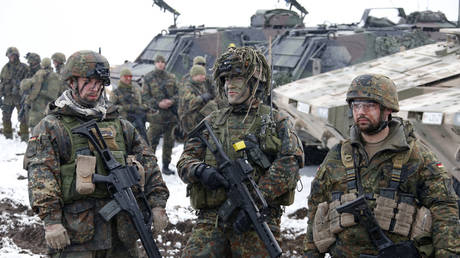