At least 16 people have been killed in Uganda amid unrest triggered by the arrest of presidential candidate Bobi Wine. Police said the deaths were caused by gunfire, suffocation from tear gas, and a hit-and-run incident.

Standing outside the Mulago Hospital in Kampala, the police’s chief pathologist said that 65 people were receiving treatment for injuries, while 350 protesters had been arrested. He added that many more may have died or been injured during the demonstrations.

One woman told local reporters that her husband had been shot dead by personnel in the Local Defense Unit, an auxiliary force under command of the Uganda People’s Defense Forces.

Protests erupted across Uganda on Wednesday and have continued into Thursday following the arrest of popstar-turned-politician Bobi Wine.

Footage from the capital Kampala on Wednesday showed intense protests breaking out, as well as some heavy-handed policing.

Some videos appeared to show bodies in the streets and isolated incidents of police officers firing indiscriminately at civilians.

Speaking to the media on Thursday, Ugandan government spokesman Ofwono Opondo condemned the protesters and said such violence has no place in Uganda.

During an interview with @BBC team in Uganda, the government Spokesperson Mr.@OfwonoOpondo said that what happened yesterday was not a protest because protests are supposed to be civil, peaceful and non violent @ubctvuganda@OgwangOgwang @nyamadon#UGDecides2021 pic.twitter.com/wbDpVmEqVA

Wine, who is well supported by Uganda’s younger generations, was detained on Wednesday for allegedly repeatedly flouting electoral guidelines, which state that no more than 200 people can attend political rallies due to Covid-19.

The 38-year-old and his National Unity Platform are considered the biggest threat to long-serving President Yoweri Museveni, who has been in power for 34 years, in the 2021 election.

Following Wine’s arrest, four of the 11 presidential candidates announced a suspension of their campaigns. 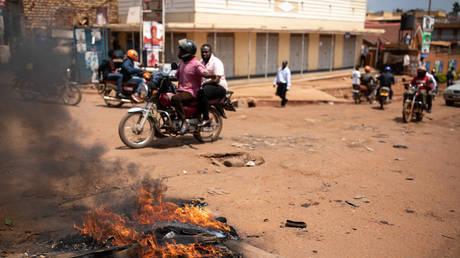