The governor of Kumamoto Prefecture in southern Japan has revealed that 14 people have been found without vital signs at a flooded nursing home. The shocking news comes amid heavy flooding in the region.

Governor Ikuo Kabashima told local news outlets that the victims were found “in cardio-respiratory arrest” at the home, which was flooded after a nearby river broke its banks. Japanese authorities use this phrase before a doctor officially certifies a death.

Elsewhere in Kumamoto, nine people are missing due to the extensive flooding, and another person is feared dead.

It comes after unprecedented torrential rain on the southern island of Kyushu triggered massive flooding in the Kumamoto and Kagoshima prefectures. With the region facing the risk of further flooding and landslides, authorities have asked 92,200 households to evacuate, the Kyodo news agency reported.

Prime Minister Shinzo Abe said that 10,000 soldiers will be mobilized to help the relief effort, and ordered the immediate shipment of relief supplies for affected residents. “The heavy rainfall is likely to continue until Sunday, and people in the area are required to be on maximum alert,” Abe warned. 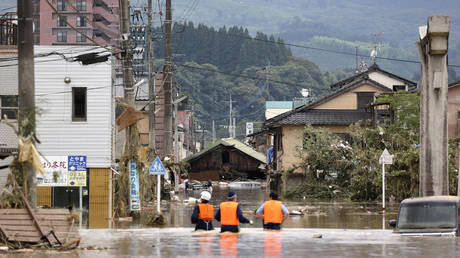