German prosecutors have charged 12 alleged members of a right-wing terrorist group with plotting attacks on mosques, in which they wanted to kill or injure as many Muslims as possible.

The men aimed to “create conditions similar to civil war by attacks on mosques and the killing or injuring of the largest possible number of Muslim believers present,” said a spokesperson for the Federal Prosecutor’s Office on Thursday.

They said that 11 alleged members of the “Group S” organization and one alleged supporter held several meetings and proposed to raise €50,000 ($59,000) in order to “procure firearms.”

Prosecutors added that the aim of the group’s founding members was to “shake the state and social order of the Federal Republic of Germany and ultimately to overcome it.”

The charges for the 12 German nationals include founding and membership of a right-wing terrorist association, and violations of the Weapons Act. All the suspects were arrested on February 14, apart from one man who remains “at large” in the southeastern city of Stuttgart.

Another man, who is not named among the 12 suspects, was arrested on February 14 but died in pre-trial detention, prosecutors said, although they did not specify more details.

One of the group’s “ringleaders,” named as Werner S., carried a “loaded pistol” that he would use for target practice at meetings, the indictment said, adding that he organized a gathering for members in September 2019.

During the meeting in Alfdorf, southern Germany, the 12 men threw axes at logs and shot arrows. Some attendees brought a bulletproof vest, weapons, and a dog trained to attack on demand, local media reported.

One of the men was reportedly in possession of footage of the mosque shootings in Christchurch, New Zealand in March 2019, in which 51 people died.

A 36-year-old who is among the suspects reportedly has a thigh tattoo of Adolf Hitler in uniform and a swastika on his chest, as well as books on “racial studies” and an axe featuring the SS insignia and the word “Aryans.”

Germany has been hit by several right-wing terrorist attacks on minorities in recent years, including the murders of ethnic Turks by the so-called National Socialist Underground, who were convicted in 2018.

The charges in Germany on “Group S” come as right-wing and Islamic extremists were denounced by protesters in neighboring Austria after gunmen killed four people and wounded 23 in the capital Vienna last week. 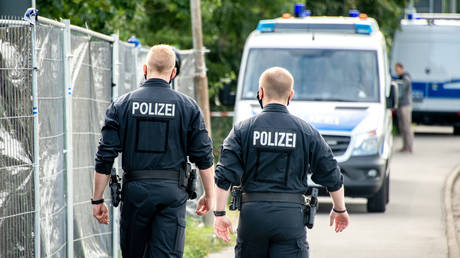