Large crowds of protesters clashed with riot police on the streets of Peru’s capital, Lima, injuring 11, as they marched to oppose the inauguration of new president Manuel Merino, after he ousted his predecessor Martín Vizcarra.

Officers fired tear gas and rubber bullets in an attempt to disperse the huge crowd on Thursday night, and 11 people were injured in the altercations between riot police and protesters, according to local medics.

Protesters could be seen exchanging fireworks and tear gas with riot police on Thursday in the latest protest to rock the capital.#Lima #Peru pic.twitter.com/kIYlYFeFyh

The protests have put pressure on the country’s congress to reinstate Vizcarra, who was popular with voters before his recent ousting. Opposition figures removed Vizcarra following an impeachment trial over allegations he committed fraud and received bribes between 2011 and 2014.

Crowds of protesters – mostly young people who had organized the demonstrations through social media – carried flags and anti-Merino banners, comparing the new leader to the coronavirus outbreak and declaring that he does not represent them.

The Peruvian National Police set up a metal fence perimeter around the country’s parliament building, near Plaza San Martín, to prevent the demonstrators from approaching.

Human rights groups have raised concerns about potential police brutality against protesters, with the Organization of American States calling on the country’s constitutional court to provide some clarification on the situation. Local rights groups said journalists were among those injured in Thursday’s violence.

As he joined the march on Thursday night, Gino Costa, a member of Peru’s parliament and the country’s Partido Morado, or Purple Party, described the protests as “peacefully defending Peruvian democracy from an abuse by Congress.”

Members of Peru’s new administration held meetings with political parties on Thursday in an attempt to find a resolution to the ongoing demonstrations over fears that they could continue throughout the remainder of the year. 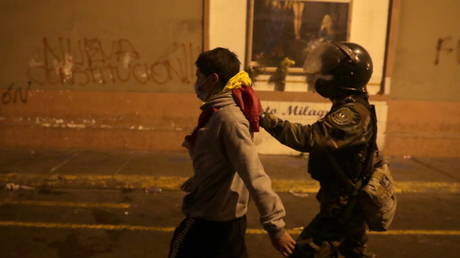