Close
Trending News
HomeWorld10 to be tried for Brussels bombings that killed 32, with 6 suspects already facing trial for Paris attacks

10 to be tried for Brussels bombings that killed 32, with 6 suspects already facing trial for Paris attacks

10 to be tried for Brussels bombings that killed 32, with 6 suspects already facing trial for Paris attacks

Ten men accused of being involved in the March 2016 bombings in Brussels, which killed 32 people, are to face trial, prosecutors have announced. Six of them are already accused in France over the Paris attacks a year before.

On Friday, spokesman for the Belgian federal prosecutor’s office, Eric Van Duyse, tweeted that “ten of those charged were today ordered to stand trial in the Court of Assizes by the indictment chamber in Brussels.”

The hearing, set to be the largest criminal trial in Belgian history, is likely to start in September 2022 and could last a year. The proceedings will be carried out in a purpose-built high-security court.

Six of the suspects, including Salah Abdeslam, are currently on trial in Paris for their involvement in the November 13, 2015 attack that rocked France’s capital. Abdeslam, a Belgian-born French Moroccan, is allegedly one of the only surviving shooters directly involved in the coordinated terrorist assault on six Parisian bars and restaurants, the Bataclan music venue and the Stade de France, where 80,000 people – including then-President Francois Hollande – were watching a football match.

He was arrested in the Brussels district of Molenbeek in March 2016 after fleeing the scene of the Paris attack. The jihadist’s suicide vest had failed to blow up during the attacks.

Last Wednesday, he was among a group of 20 men transported to the Palais de Justice courthouse in central Paris for the long-awaited trial of the November 2015 slayings that saw over 130 people killed.

The Islamic State terrorist group has claimed responsibility for the attacks in Brussels and Paris. 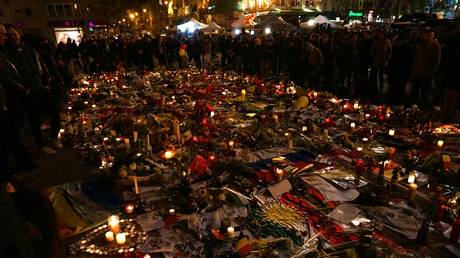