WORKING out your dog’s age in “human years” by multiplying it by seven is wrong, according to scientists who’ve created a new method.

They claim to have created a formula that more accurately compares the ages of humans and dogs by comparing their genomes as they age. 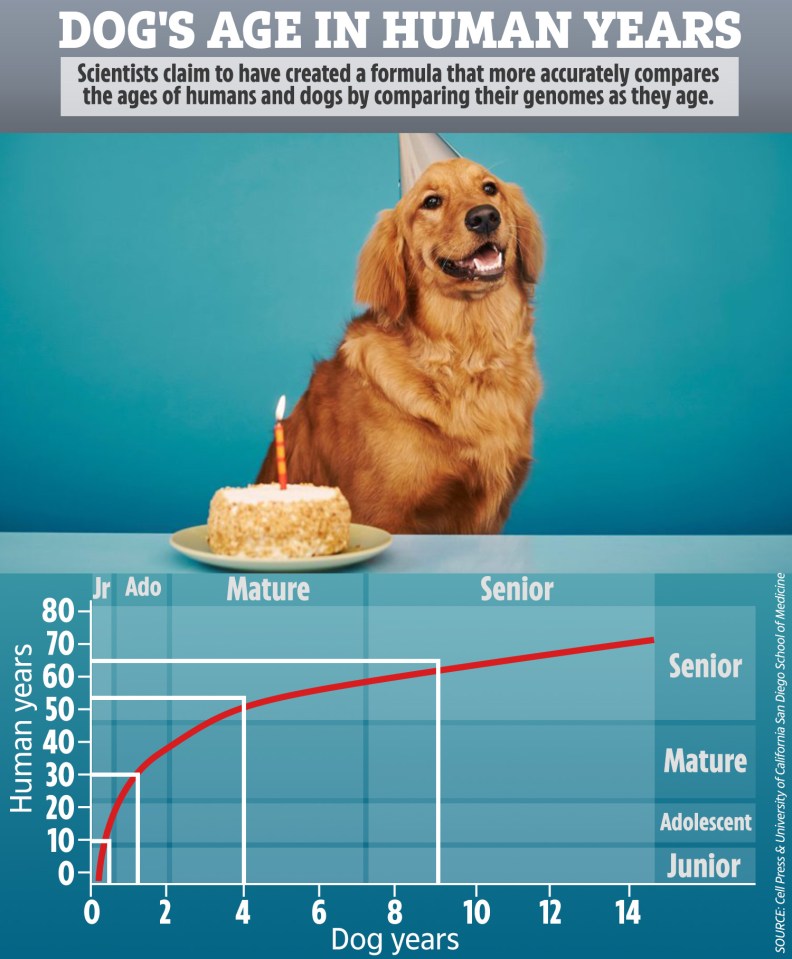 The method was created by dog loving researchers at University of California San Diego School of Medicine in the US.

It’s based on changing patterns of methyl groups that can be found in both dogs and humans.

As both humans and dogs age, methyl groups are added to our DNA molecules, which can change the activity of a DNA segment without altering the DNA.

It’s an essential part of normal development and works to repress sudden ageing and the formation of cancerous cells.

The research looked into human and dog genomes[/caption]

DNA methylation is currently regarded by many scientists as the best way to measure the ageing speed of a mammal, or what some scientists refer to as the epigenetic clock.

The scientists think their new formula could be useful for vets as well as pet owners.

Senior author of the study Trey Ideker said: “There are a lot of anti-aging products out there these days — with wildly varying degrees of scientific support.

“But how do you know if a product will truly extend your life without waiting 40 years or so?

“What if you could instead measure your age-associated methylation patterns before, during and after the intervention to see if it’s doing anything?”

After analysis, they were able to create a graph that can be used to match up your dog’s age with the comparable human age.

It shows how rapidly dogs age.

A one-year-old dog is said to be similar 30-year-old human.

A four-year-old canine is comparable to a a 52-year-old human.

By the time a dog reaches seven-years-old its ageing is thought to slow.

Ideker said: “This makes sense when you think about it — after all, a nine-month-old dog can have puppies, so we already knew that the 1:7 ratio wasn’t an accurate measure of age.”

He added: “I have a six-year-old dog — she still runs with me, but I’m now realizing that she’s not as ‘young’ as I thought she was.”

The formula doesn’t fully address the fact different dog breeds age at different speeds but the scientists still consider it to be more accurate than other methods.

The researchers plan to study other dog breeds next to see if they get similar results.

This research has been published in the journal Cell Systems.

In other news, insects trapped in amber for 99million years have revealed stunning details about creatures from that time period.

Do you have a favourite breed of dog? Let us know in the comments…