USERS of the new Xbox Series X are claiming their consoles are going up in smoke days after receiving them.

However, multiple people responding to the posts have cast doubt on the legitimacy of the clips.

Microsoft appeared to query the veracity of the clips in a tongue-in-cheek tweet on Wednesday.

Tagging the Xbox Poland account in the post, they shared a video of what appeared to be an Xbox Series X with smoke pouring out of the top vent.

Similar footage was posted by Twitter user Nick Blanco. Both clips seemed to suggest the issue began within two minutes of switching the console on.

In response to the tweets, users highlighted that the “smoke” clouds looked suspiciously like the vapour produced by a vape pen.

One person tweeted: “Not meaning to pry but you’re not vaping just above your console order to make it seem like it’s smoking right?”

Another said: “Electrical smoke is much darker and more dense. This is vape.”

Twitter user @XboxStudio then posted a video revealing that the same effect could be achieved by blowing vape smoke into the console’s vents.

They suggested the viral clips were “fake news”.

In a tweet on Wednesday, Microsoft suggested the footage did not show real smoke.

“We can’t believe we have to say this, but please do not blow vape smoke into your Xbox Series X,” the official Xbox Twitter account wrote.

The gaming machines can process graphics in up to 8K and boast powerful engines that almost eliminte loading times.

They’re up against stiff competition in the form of the £449 PlayStation 5, which Sony launched in the US, Japan and other markets today.

What do you think of the new consoles? Let us know in the comments! 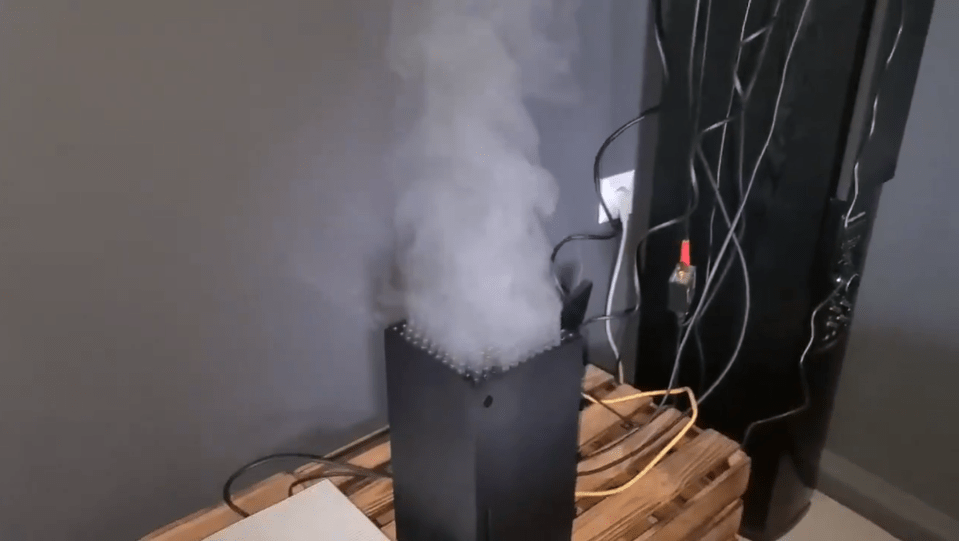