IF YOU fancy getting inked without the pain of going under the needle, these “wearable tattoos” may be for you.

Scientists say the fledgling technology is printed directly onto the skin without the use of heat – and could revolutionise how we monitor our health.

The slap-on body art doubles up as a biometric sensor, tracking things like your heartbeat, body temperature and blood oxygen levels.

Developed at Penn State University, the tech was described Monday in the journal ACS Applied Materials and Interfaces.

“In this article, we report a simple yet universally applicable fabrication technique with the use of a novel sintering aid layer to enable direct printing for on-body sensors,” first author Dr Ling Zhang wrote.

Wearable sensors are gradually evolving from watches and electrodes to gadgets that can take more precise measurements.

The fledgling technology is said to be more comfortable than a lot of wearable biosensors, such as the Apple Watch[/caption]

Most of us have worn them at one time or another, from simple fitness bands to intricate health devices for heart patients.

Biosensing “tattoos” have been developed by engineers before but require a lot of heat to apply to the skin – too much to ever safely apply to our skin.

The tech needs these high temperatures to sinter, a process by which the metallic components of the sensor bond together as they mould to the skin.

The new wearable, built with the help of scientists at the Harbin Institute of Technology in China, neatly sidesteps this issue.

Using a new technique, researchers were able to lower the temperature required for sintering from 300C (572F) to room temperature (around 20–22C or 68–72F).

“To get around this limitation, we proposed a sintering aid layer – something that would not hurt the skin and could help the material sinter together at a lower temperature.”

According to UPI, scientists made the newly developed layer out of polyvinyl alcohol paste and calcium carbonate.

It allowed them to get the device to stick to the skin using only a hairdryer set on the cool setting.

Scientists have discovered the world’s oldest tattoos on the arm of a 5,000-year-old Egyptian mummy on display at the British Museum.

The mummy, known as Gebelein Man A, pushes back evidence of figurative tattoos by 1,000 years.

The oldest tattoos were once thought to belong to a South American Chinchorro mummy who had a moustache-like design inked on his face.

It was initially thought he died in 4,000BC but in 2015 researchers found he is in fact younger than 5,200-year-old frozen mummy Ötzi the Iceman.

Ötzi was found by walkers preserved in a glacier on the Italy-Austria border in 1991.

Ötzi would have done lots of walking im the Alps and it is thought the tattoos may have been a kind of acupuncture to ease joint pains.

There is evidence of tattooing on mummies found in the Taklamakan Desert in China dating from 1,200 BC.

Modern tattoos of the kind sported by David Beckham are thought to have developed in Polynesian cultures over centuries.

The name comes from the phrase tatatau, meaning to hit or strike, which the British sailor James Cook heard when he reached Tahiti in 1769.

The tattoo comes off in the shower but could be stuck on again after a wash, and doesn’t damage the skin when removed.

“That’s especially important for people with sensitive skin, like the elderly and babies,” Dr Cheng said.

“The device can be useful without being an extra burden to the person using it or to the environment.”


Atlantic Ocean hottest in 3,000 years as experts warn of ‘extinction’

In other tattoo news, this weird soundwave body art can play a dog’s bark, a child’s laugh or even your favourite song from your smartphone.

A mega Fortnite fan has been inked with a huge tattoo of his favourite character.

And, these ancient mummies are decorated with “magical” tattooed jabbed into their skin using metal rods, cactus spines and soot.

What do you think of the wearable tattoos? Let us know in the comments! 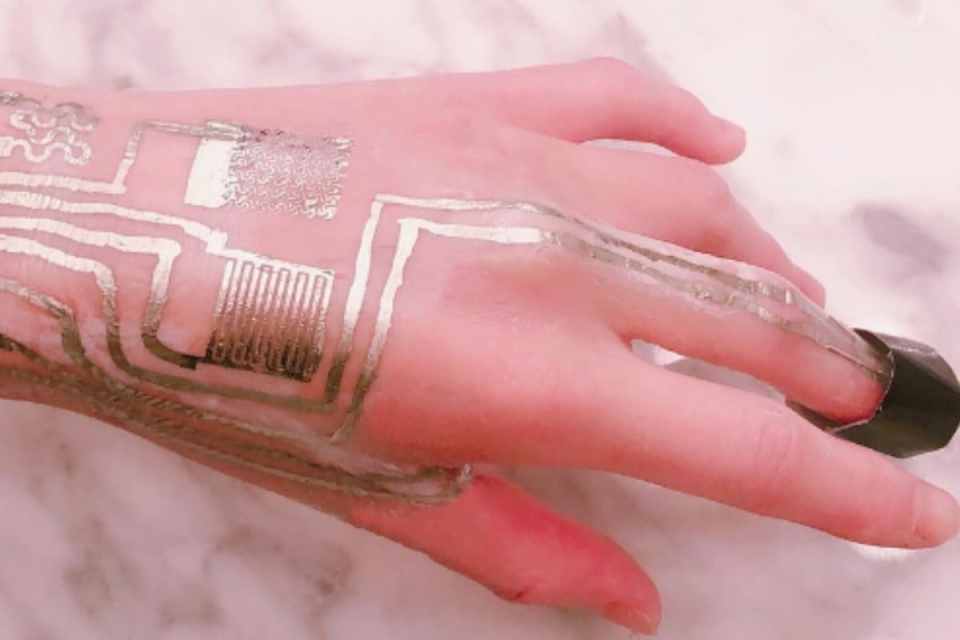