THE US Air Force’s first new bomber in more than 30 years is nearly ready for its first flight.

The top-secret B-21 stealth plane is designed to fire missiles and nukes at targets deep into enemy territory that normal aircraft can’t reach. 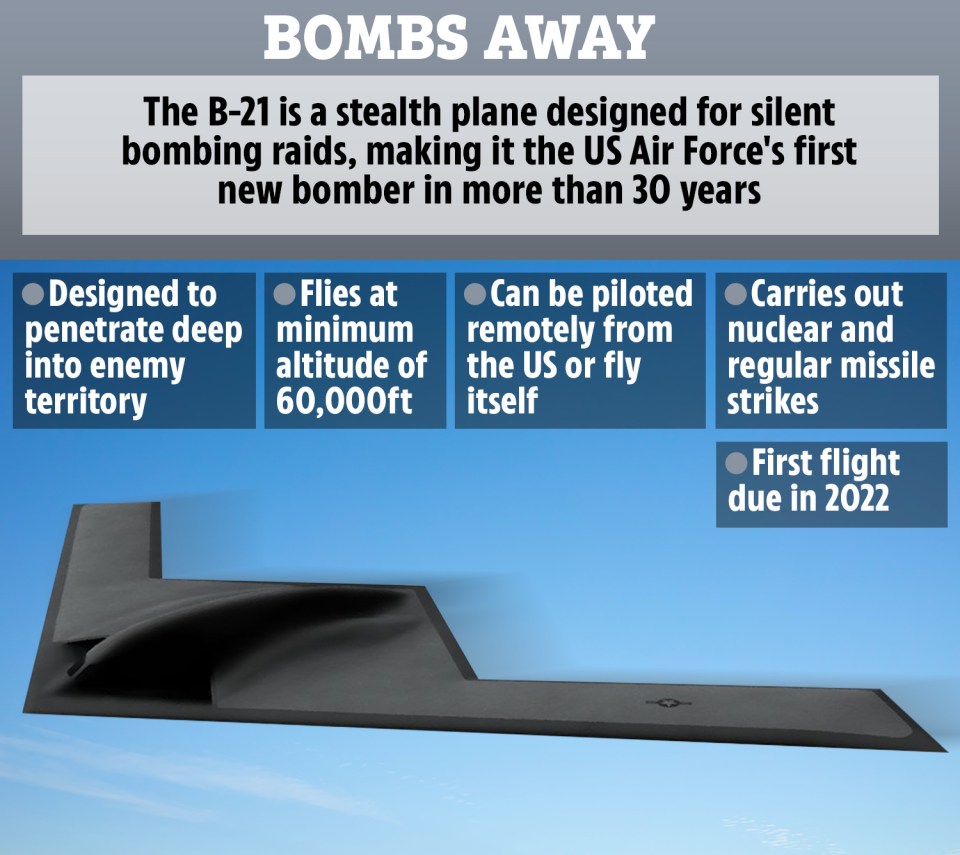 Experts say the bomber will be invisible to Chinese and Russian radar systems. It’s slated for active duty in 2025, according to techeblog.

“This aircraft is part of the Long Range Strike Bomber program (LRS-B),” the site wrote in a report on Wednesday.

The B-21 is the followup to the angular B-2 stealth bomber flown by the Air Force since 1989.

While the B-2 is still in service, stealth technology has come a long way in the three decades since its first flight.

Working with aerospace firm Northrop Grumman, the US Air Force has devised a followup that will allow it to hit any target, from anywhere.

Among the high-tech additions is the capability to fly the plane remotely.

Apparently, the B-21 can also fly itself, using advanced artificial intelligence to pick out targets and avoiding detection with no human input.

It won’t be completely autonomous, however: A person will always make the final call on whether or not to hit a suggested target.

Very little is known about the B-21 aside from a handful of photos and artist impressions released by Northrop Grumman.

Apparently. even frustrated congressmen have been denied information about the plane’s costs and abilities.

Like the B-2 (pictured), the B-21 stealth bomber is capable of hitting targets from extremely high altitudes[/caption]

Construction of the first unit reportedly began in Summer 2019, and an official image of a B-21 in a hangar shared this year seems to confirm this.

Couples with the lack of horizontal and vertical stabilisers, this is thought to give the craft the best possible protection against enemy radar.

The US Air Force plans to buy at least 100 B-21 Raiders for $550 million each, according to 2012 Pentagon documents released as part of a Freedom of Information request.

The aircraft is currently under construction at a Northrop Grumman base in Palmdale, California.

As well as firing conventional and nuclear missiles, the plane is capable of carrying out reconnaissance work.

Apparently, it can autonomously work as a flying data centre to share information it collects with other US jets and military bases on the fly.

The B-21’s first flight was original scheduled for late 2021, but this is thought to have been pushed back to 2022.

In other news, the US military is developing a laser can ID terrorists by scanning their heartbeats from 650 feet away.

the US Navy Seals and Royal Marines are looking to kit out their special forces with 50mph Iron Man-style jet packs.

And, here are the weirdest things lost by Uber passengers – including a jetpack and a bulletproof vest.

What do you think of the B-21 bomber? Let us know in the comments!