THE US Marine Corps is testing a powerful electroshock weapon that can zap enemies from 300 feet away.

Dubbed “Specter”, the non-lethal projectile can be fired from a shotgun and downs targets using a taser-like electric shock. 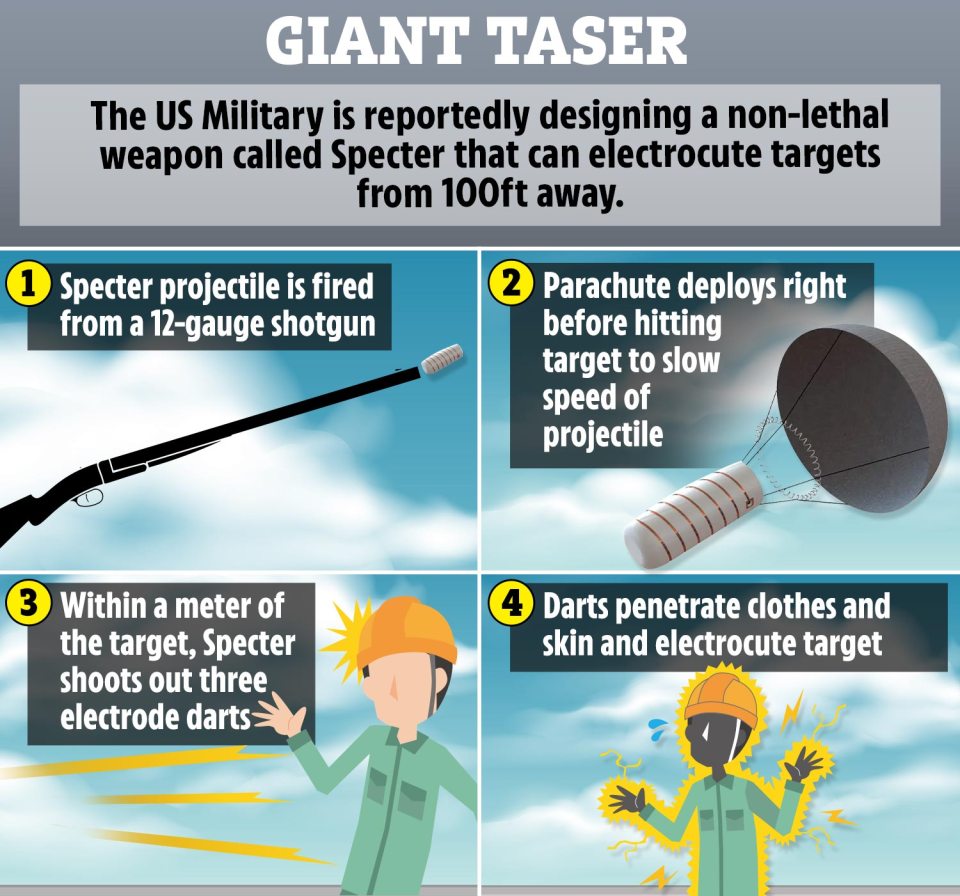 The weapon is the brainchild of Colorado-based tech research firm Harkind Dynamics and is part-funded by the US Department of Defense, New Scientist reports.

The makers of Specter (Small arms Pulsed Electronic Tetanization at Extended Range) say it can be fired from any 12-gauge shotgun.

It’s designed to incapacitate targets rather than kill them, with a range of up to 330 feet (100 metres) – roughly the length of a football pitch.

For comparison, the average range of a taser is roughly 25 feet (7.6 metres).

To avoid causing serious injury, the projectile deploys a parachute right before it hits an enemy to slow it down before impact.

According to Harkind Dynamics, the parachute halves the speed of the projectile.

Within a metre of its target, Spectre releases three electrode darts that can penetrate clothes and skin.

It’s these darts that deliver the electric shock, which incapacitates the target.

Apparently, the darts will keep shocking whatever they’ve hit if they sense movement – to ensure targets stay down.

Non-lethal weapons like tasers are useful to riot police and other law-enforcement officers who need to take down violent people from a distance.

However, the US Army and Marine Corps are increasingly kitting soldiers out with the weapons to subdue unruly individuals without killing them.

Some experts expressed concern that the Spectre weapon could seriously injure those it’s fired at.

“If the parachute did not deploy, then you have the danger of direct impact with blunt trauma and possible penetration,” a spokesperson for the Omega Research Foundation, a UK-based security tech monitor, told New Scientist.

“If it hits the head there is a risk of serious injury or death,” they added.

It’s not clear when Pentagon officials hope to get the weapon into the hands of Marine soldiers.

In other news, the US military is reportedly developing a laser weapon that can generate the sound of a voice out of thin air.

The US Army is also testing a 50-kilowatt laser weapon that incinerates drones, helicopters, planes and missiles.

And, here are the weirdest things lost by Uber passengers – including a jetpack and a bulletproof vest.

What do you think the laser could be used for? Let us know in the comments!