THE US Army is building a Star Wars style cannon said to be the most powerful laser weapon in the world. 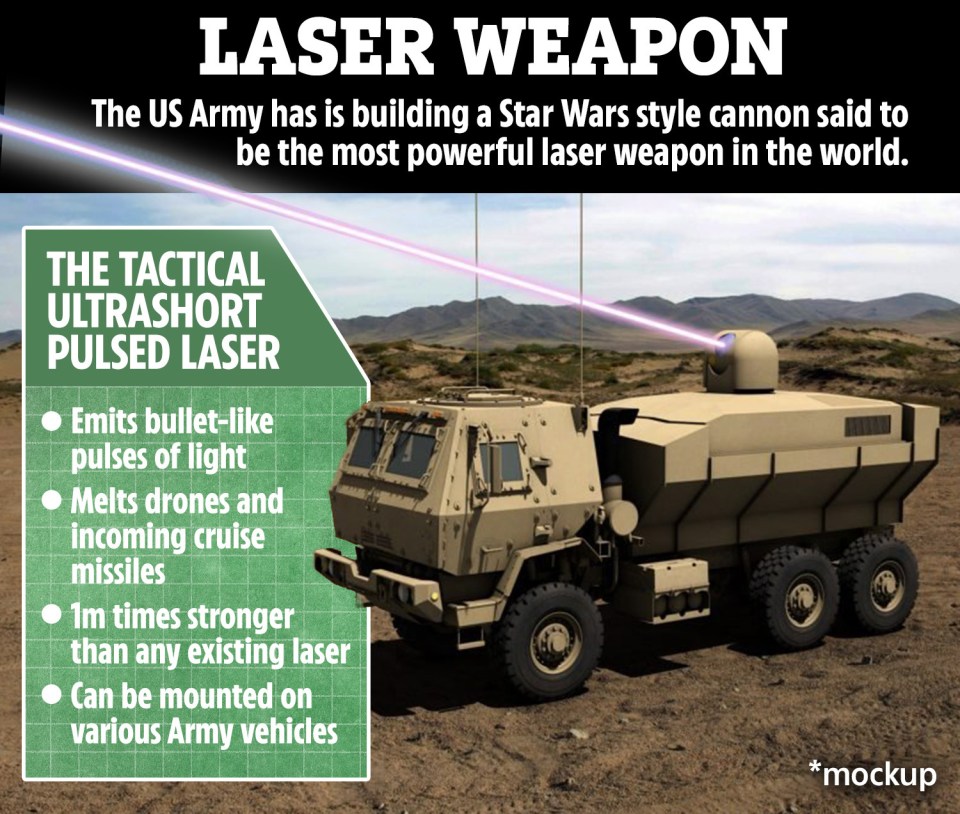 If fully developed, the sci fi contraption will be a million times more powerful than any laser before it, according to New Scientist.

News of the scheme emerged last week after the Army posted a notice for the prospective weapon on the Pentagon’s Small Business Investment Research website.

The technology will be different from current lasers, according to the listing, as it will emit short pulses that rely on low energy.

That means it will fire bullet-like pulses of light rather than the continuous beams of energy used by most lasers today.

The laser could be mounted onto Army vehicles. Pictured is the High Energy Laser Mobile Demonstrator (HEL MD), onto which the Army has mounted lasers in the past[/caption]

The Army believes this is a more effective method for taking down objects like cruise missiles as it delivers the killer blow in a fraction of the time.

While current lasers need to focus on a target for a few seconds before melting it, the new weapon would do this in 1quadrillionth of a second.

In that space of time, the cannon would deliver 1trillion watts of energy – more than 80 times the power released by the Space Shuttle at launch.

That would make it by far the most powerful laser on Earth.

Unlike conventional lasers, the weapon would eliminate targets through three mechanisms, according the Army.

They include vaporising the object at its surface and pummelling it with a blast wave caused by the resultant rapid expansion of gas.

In addition, the Army hopes to create an Electromagnetic Pulse (EMP) effect using the firearm.

The high levels of energy released by the weapon could build up in electronic devices near the target, rendering them inoperable.

Such a weapon could be extremely useful in combating drones and small missiles, according to New Scientist.

Against human enemies, the weapon could cause a nasty burn, or even temporary or permanent blindness.

Laser weapons that blind troops are currently banned under a 1995 treaty.

The US first deployed lasers to Naval forces in 2014. It is reportedly aiming to trial a prototype UPSL by 2022.

In other news, the US Navy experimented on far-fetched technologies including a “space modification weapon”, according to leaked documents.

Military researchers are also reportedly developing a laser weapon that can generate the sound of a voice out of thin air.

And, the US Army is also testing a 50-kilowatt laser weapon that incinerates drones, helicopters, planes and missiles.

What do you make of the laser weapon? Let us know in the comments!