A VOLCANIC stone raft has finally crashed into Australia’s coast after an underwater volcano created it last year.

The pumice stone raft was bigger than Paris when floating in the ocean and it’s ferried lots of marine organisms to Queensland beaches.

The stone raft was larger than Paris[/caption]

The floating mass of pumice rocks was discovered by sailors as they made their way to Fiji and filmed it taking over the ocean.

It’s thought to be the result of a deep-sea underwater volcanic eruption near Tonga in the South Pacific Ocean.

Pumice is formed by lava coming into contact with water.

As the lava cools it forms stone with lots of gas bubbles inside and that’s why pumice rocks float.

The pumice has finally reached the shore[/caption] 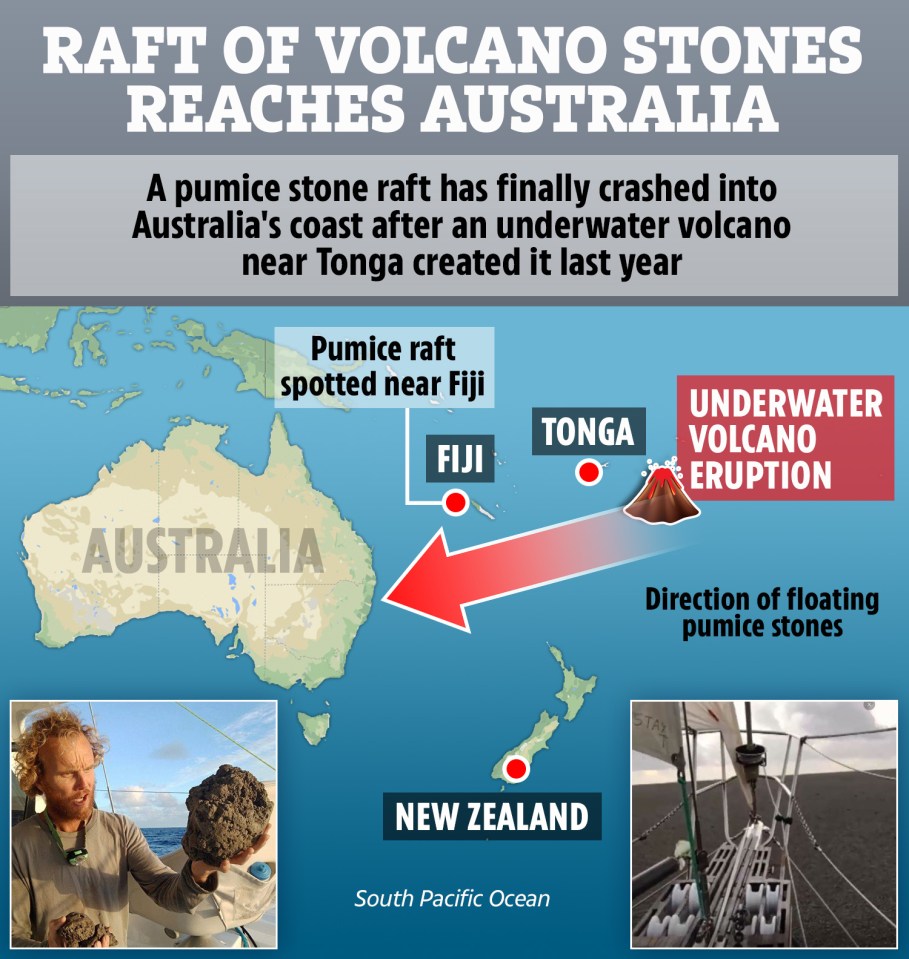 Large gatherings of pumice rocks like this are referred to as pumice rafts as the rocks come together to form one big moving mass.

Satellites could observe the mass of stones from space as it drifted towards Australia.

On its way it has picked up lots of marine organisms that cling to the rocks and could find a new home in Australian coral reefs.

These organisms include corals, algae and barnacles.

Geologist Scott Bryan from the Queensland University of Technology said: “Each piece of pumice has its own little community that has been transported across the world’s oceans – and we have had trillions of pieces of this pumice floating out there following the eruption.

“Each piece of pumice is a home, and a vehicle for an organism, and it’s just tremendous.

“The sheer numbers of individuals and this diversity of species is being transported thousands of kilometres in only a matter of months is really quite phenomenal.”

They can be dangerous for sailors and can cause boat damage.

They can also smother coastlines.

Scientists are hopeful that this particular pumice raft will boost reef ecosystems but know it’s not a magical solution for stopping their decline.

“This is about a boost of new recruits, of new corals and other reef-building organisms, that happens every five years or so.

“It’s almost like a vitamin shot for the Great Barrier Reef.”

How do volcanoes erupt?

In other news, a rare white killer whale spotted off the coast of Alaska is thought to be one of only five in the world.

Amazing footage of several ‘reverse waterfalls’ on clifftops has been captured in Australia.

And, coastal flooding will rise by up to 50% globally by 2100 – endangering millions of lives, a new report has warned.

What are your thoughts on the volcanic rock raft? Let us know in the comments…