AN AMATEUR fisherman has snared the first ever “albino” shark caught off the coast of Britain.

Jason Gillespie, 50, was deep-sea fishing with some friends near the Isle of Wight when he caught a tope shark that was entirely white.

The shark, which measured around 3ft, is leucistic, a genetic condition which means it’s lost all the pigment in its skin.

Under normal circumstances, Jason, from Waterlooville, Hampshire, would have immediately released the shark.

However, due to its unusual colouration, the shop fitter hauled this one on board so he could take a few snaps before letting it go.

Jason said: “I’ve been fishing for 30 years and I’ve never seen one like that. apparently it’s a condition where the pigment dies out of the skin colour.

Jason Gillespie, 50, was deep-sea fishing with some friends when he caught a tope shark that was entirely white[/caption]

“What’re the chances? I have no idea. It’s the fish of a lifetime, one in a million.”

Leucism describes a variety of conditions that cause a creature’s feathers, skin, scales or fur to go white.

It’s similar to albinism, but only a partial loss of pigment occurs, with the eyes retaining their colour – while albino peepers are a menacing red.

Leucistic creatures are rare because they often don’t survive long in the wild having been stripped of their natural camouflage, which makes it harder to capture prey and evade predators.

The shark, which measured around 3ft, is leucistic, a genetic condition which means it lost all the pigment in its skin[/caption]

Jason explained that he had heard of all-white sharks before, but had never seen one in person.

“I [had] heard of one person from Wales who caught one years ago but it was much smaller, about 6 lb,” Jason explained.

“With tope, they are a protected species, so we unhook them in the water, but the minute we saw this one I shouted to my mate to grab the net and knew I needed to get some photos of it so we pulled her on board and took some pictures.”

After photographing the shark for what he said was “less than a minute,” Jason released the shark back into the ocean.

The tope shark feed on a variety of fish species and crustaceans, and can travel huge distances.

They are often found near continental shelves and are widely distributed across the planet.

The sharks are commonly found in UK waters and can travel from Britain all the way to the Canary Islands.

They are thought to be harmless to humans, according to MarineBio.org.

In other news, the world’s first picture of an albino panda was snapped in China last year.

A super-rare “ghost owl” with white feathers was recently spotted in Britain.

And, the world’s oldest animal footprints were uncovered last year by archaeologists.

What do you think of the albino shark find? Let us know in the comments! 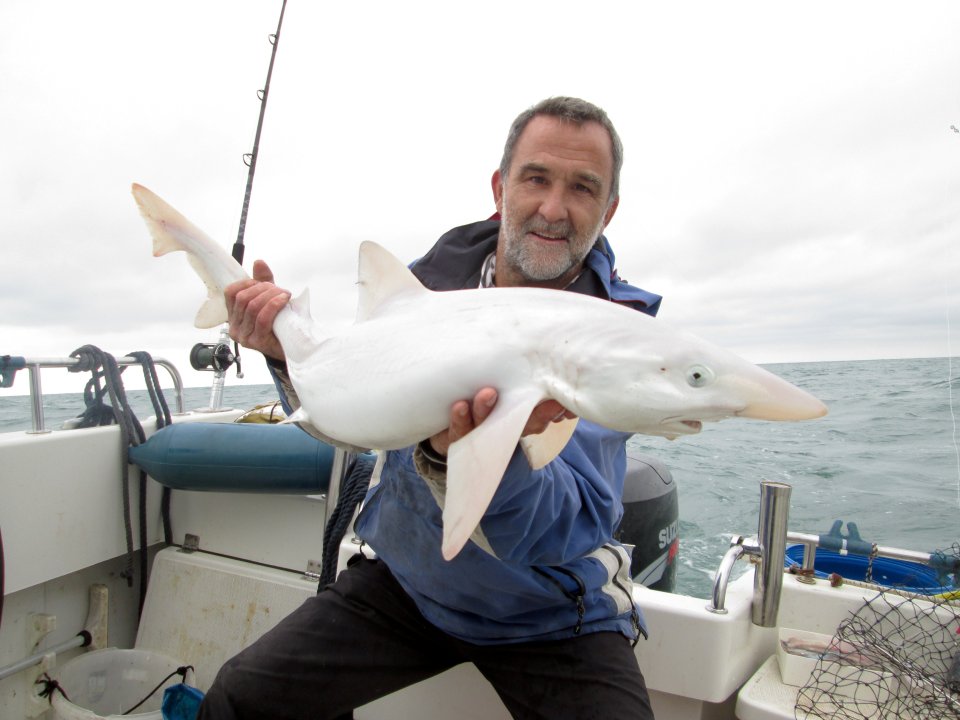 A star is born: Scientists capture...