THE skull of a ‘cousin’ of the human species unearthed in South Africa could shed more light on how humans evolved, according to its finders.

The two-million-year old skull belongs to an extinct species called Paranthropus robustus that’s thought to have been a ‘cousin species’ of our direct ancestor – Homo erectus.

It took 300 hours to piece the skull back together[/caption]

Paranthropus robustus and Home erectus are thought to have lived around the same time but the latter survived for longer.

Fragments of the rare skull were actually dug up in 2018 but researchers are currently looking into what they can teach us.

It was found by Australian researchers at the Drimolen archaeological site north of Johannesburg.

Dr Angeline Leece from Melbourne’s La Trobe University told the BBC: “Most of the fossil record is just a single tooth here and there so to have something like this is very rare, very lucky.”

The discovery was made in South Africa[/caption]

The skull was found very close to where fragments of a Homo erectus child were uncovered in 2015.

Co-researcher Jesse Martin told the BBC that working with the skull was like handling “wet cardboard”.

He even used a straw to suck the last pieces of dirt from it.

It took a painstaking 300 hours to piece the skull back together.

Paranthropus robustus likely competed with our ancestors and are an example of “micro-evolution”.

The species had small brains and big teeth[/caption]

They had large teeth and small brains, which is the opposite of Homo erectus.

They could have died out due to a wetter environment reducing their food availability.

It’s thought Homo erectus ate both plants and meat and this could have help them to outlive Paranthropus robustus.

New findings about the skull have just been published in the Nature, Ecology and Evolution journal.

In other archaeology news, the ‘biggest archaeological discovery of the year’ will soon be announced by Egypt’s Ministry of Tourism and Antiquities.

A sacrificed llama mummies have been dug up in Peru and they’re almost perfectly preserved after 500 years.

What do you think of the skull discovery? Let us know in the comments… 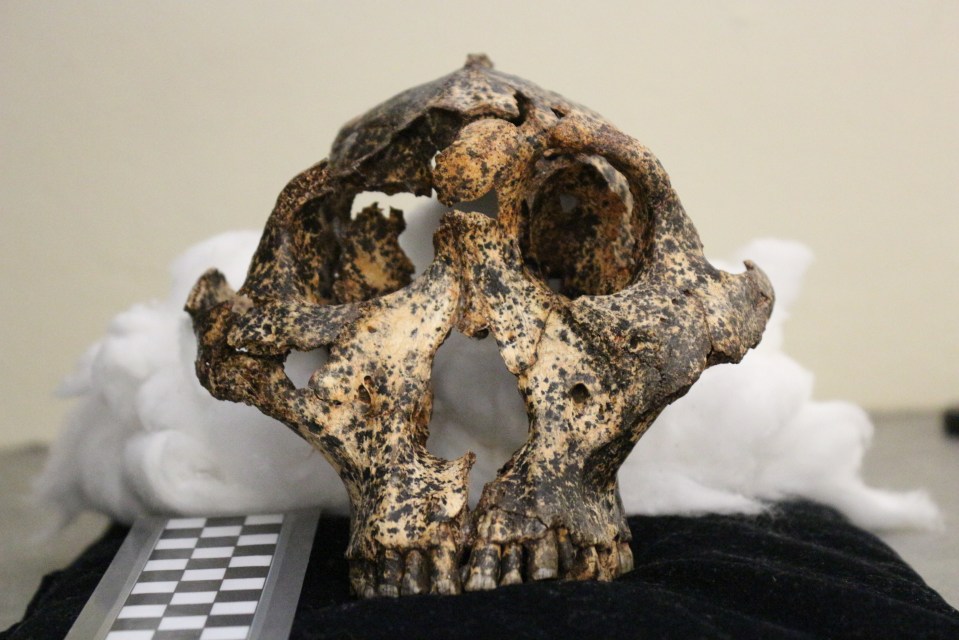