CONSPIRACY nuts claim to have discovered a “haunted” forest in an image on Google Maps.

The photo, shared on social media over the weekend, shows a strangely coloured area of a forest in central California.

It sparked a debate on Reddit, where user “Conscious_Que” posted a screen grab of the “coloration anomaly” taken from Google Street View, the Daily Star reports.

In comments below the post, some suggested the purple-greenish patch was a result of paranormal activity.

Another agreed that the forest looked menacing: “Don’t go. No one could came back from there…”

And the theories only got weirder as other users chipped in with their ideas on what the lights meant.

A fourth wrote: “A glitch in the matrix.”

As it turns out, the origin of the intensely hued zone is far less sinister than some Redditors would have you believe.

Putting forward a more grounded explanation for the “glitch”, one user said: “The [camera’s] sensor probably died and we got an haunted forest.”

Back in 2018, netizens went wild over a Street View image of a road in Europe covered in an eerie “purple substance”.

The bizarre hue appears to be crawling over the pavement and up nearby houses. It was also the result of a bizarre technical snafu.

In other news, a netizen who claimed earlier this month to have spotted a UFO on Google Maps was shocked to discover he’d in fact sighted a bird poo.

Scientists have identified the place where aliens are most likely lurking in the Milky Way.

Aliens may have dropped life-detecting sensors onto Earth, according to a Harvard University professor.

And, the European Space Agency has revealed it will be sending a probe called EnVision to study the planet Venus. 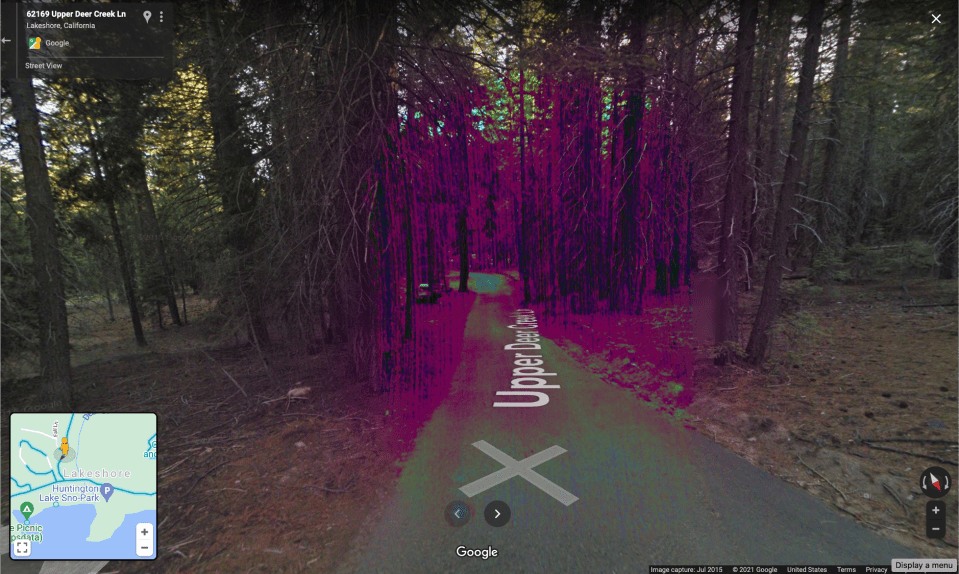 ‘I will not return’: Record-breaki...