DR Peter Scott-Morgan, a terminally ill scientist, had tears in his eyes as he heard his future robotic voice for the first time.

The genius is on a mission to become the world’s first cyborg in a bid to combat his muscle wasting disease.

Peter listened to the emotional recording alongside his husband[/caption]

Diagnosed with motor neurone disease (MND) in 2017 – the same condition that afflicted Professor Stephen Hawking – Peter refused to accept his fate and embarked on a quest to become a fully-fledged cyborg.

The robotics expert, based in Torquay, Devon, has already “re-plumbed” his stomach to avoid needing a carer to eat and go to the bathroom, and has even ditched his voice box for a digital one.

Diagnosed with motor neurone disease in 2017, Peter refused to accept his fate and embarked on a quest to become a fully-fledged cyborg[/caption]

Peter is the subject of a Channel 4 documentary that aired this week, “Peter: The Human Cyborg”.

“Think of it as a science experiment,” he says during the programme.

Speaking about losing his voice, the scientist remarked: “I really want, when I’m, locked in, to sound a bit like me and convey some of the emotion and hopefully gain a bit of the empathy from people in my current state.

“Without that, I think I’ll feel very very isolated.”

He eventually heard his robotic voice alongside his family, including husband Francis, which was a very emotional moment because by this point Peter had almost lost his ability to talk.

The emotional moment saw the family listen as his robotic voice was programmed to sing.

The documentary was filmed over two years and follows Peter since his tragic MND diagnosis – which he discovered when one day he became unable to move his leg.

“I did what I have done all my life which is, as I get out of the bath, you shake your foot to get the water off – and it wouldn’t happen,” he recounts.

The Channel 4 documentary, “Peter: The Human Cyborg”, airs next week, following him from his MND diagnosis to now[/caption]

“After a series of tests I was diagnosed with motor neurone disease – a horrific, cruel disease.”

By his side the whole time has been his partner Francis, who he met when he was nearly 21.

“It is a shock… how do we deal with this? I’ve shed a tear. You feel alone, you feel very afraid,” Francis says. “Watching him deteriorate… it’s traumatic.”

While Peter remains remarkably positive throughout the documentary, he says at one point: “To see how my body is wasting away – it creeps up on you when you least expect it, and it gets through a chink in your armour that you didn’t even know was there.

“That’s when I feel myself get close to tearful. I feel emotion welling up.

“I think the first time was when I looked at my legs and they really were withered.”

He hopes his journey can save other MND sufferers from being “locked in”, a process that leaves sufferers with a fully-functioning mind trapped in a body that can no longer move.

“From the very beginning, Francis and I always knew that this was a journey,” Peter, adds. “Not just for us, also for absolutely everyone who feels trapped in their bodies.

Peter is determined to become the most advanced human cyborg ever created in 13.8billion years[/caption]

“It’s alright to feel scared, it comes with being human. We can each be far stronger than we ever believed. We can fight our fears and progress will then accelerate.”

Peter says that facing everything head-on with the man he loves has helped him.

“We’ve always had the mantra of turning liabilities into assets, and motor neurone disease is no exception,” he adds.

He also took inspiration from Stephen Hawking, whom he had the privelege of meeting before his death in 2018.

“Because if you focus and get frustrated, and grieve too much – because that’s what it feels like, you’re grieving for all the life, all the things you could do – that is psychologically corrosive.”

On his website, Peter said this vision is far from just a dream: “We are within touching distance of changing everything. I’m not dying – I’m transforming.” 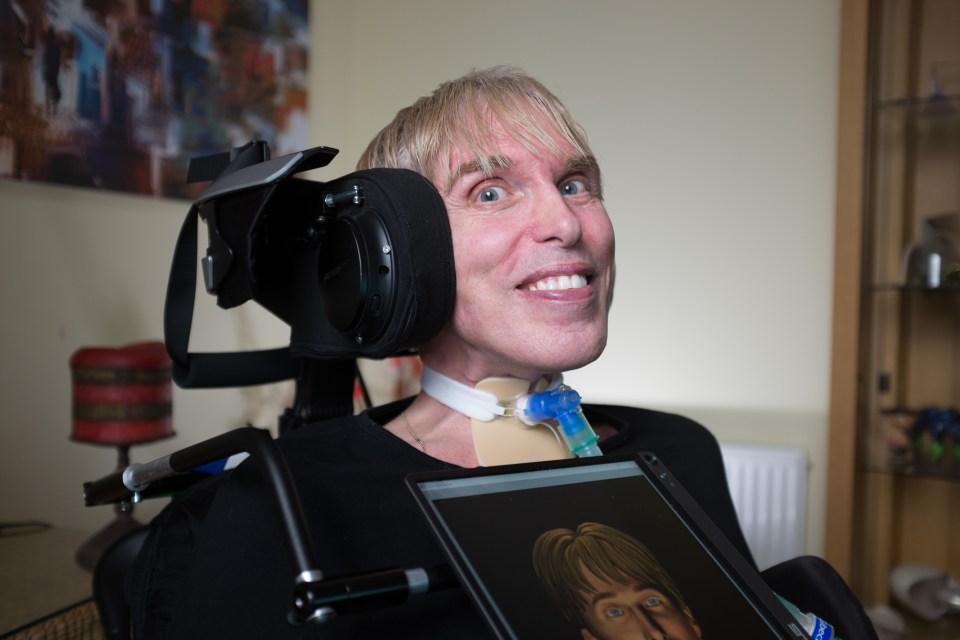