A SUPERSONIC jet tipped to be the next Concorde could one day fly passengers from London to New York in three-and-a-half hours.

Boom Technology unveiled a prototype of its 1,451mph XB-1 aircraft on Wednesday, with its first test flights scheduled for next year. 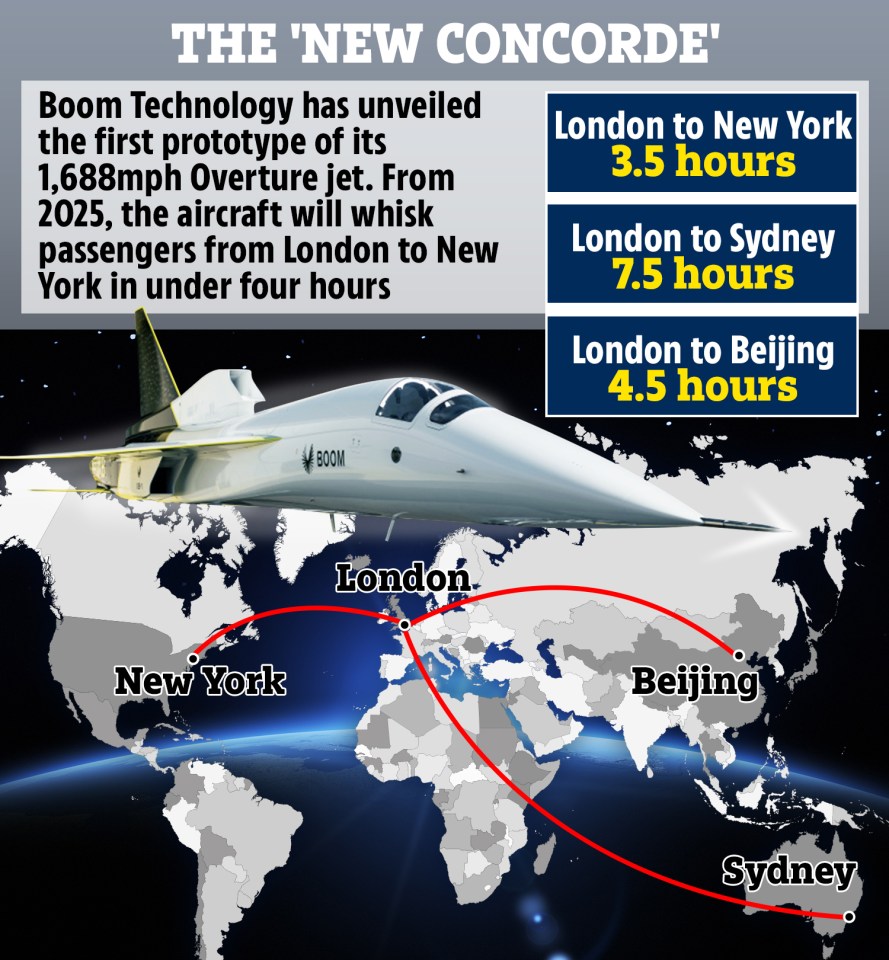 If successful, it could lead to a full production model – named Overture – getting the green light.

Based in Colorado, Boom has spent years working on a commercial airliner that can break through the sound barrier.

“The nice thing about supersonic jets is if you’re concerned about time on airplanes, less time is better,” Boom CEO Blake Scholl said.

A handful of US companies are vying to bring back supersonic passenger travel which died out with the Anglo-French Concorde’s retirement in 2003.

Test flights are scheduled to begin in 2021[/caption]

The prototype is roughly half the size of Overture, the fully fledged passenger jet that Boom hopes will take flight in 2025[/caption]

Today’s planned supersonic jets, while quieter and more fuel efficient than the Concorde, are under pressure from environmentalists and airports to meet noise levels and carbon emissions standards for conventional planes.

Denver-based Boom said in a release that XB-1 will undergo a carbon-neutral flight test program which is to start in 2021 in Mojave, California.

The flights will be used to collect data to refine the safety and aerodynamics for their commercial project.

Boom CEO Blake Scholl stands next to the experimental aircraft[/caption]

The aircraft’s first flight is targeted for the backhalf of 2021, with entry-into-service of the company’s supersonic airliner Overture expected by the end of the decade, Scholl said in an interview.

Overture, a supersonic airliner with 65 to 88 seats priced initially at business class fares, would cut transatlantic flying time in half to about three-and-half hours.

It will be roughly twice the size of the X-B1 prototype, and will travel at up to 1,688mph.

Once the Overture is in commercial service, routes from New York to London, Paris to Montreal and Madrid to Boston will take less than four hours – better than half the time of conventional jets.

Test flights of the pane will take place in Mojave, California[/caption]

The company says it has orders from Japan Airlines Co and Virgin Group.

Scholl said he expects the aviation market, hard-hit by the coronavirus pandemic, to rebound by the time Overture comes to market.

Scholl founded Boom in 2014 after serving in leadership roles at Amazon and Groupon, according to the company’s website.

The finished product will seat up to 88 passengers, according to Boom[/caption]