STARAZERS across the globe will be treated to a rare solar eclipse this weekend.

The “Ring of Fire” eclipse is named after the fiery glow that appears around the edges of the Moon – and we’ve got all the info you need to spot it. 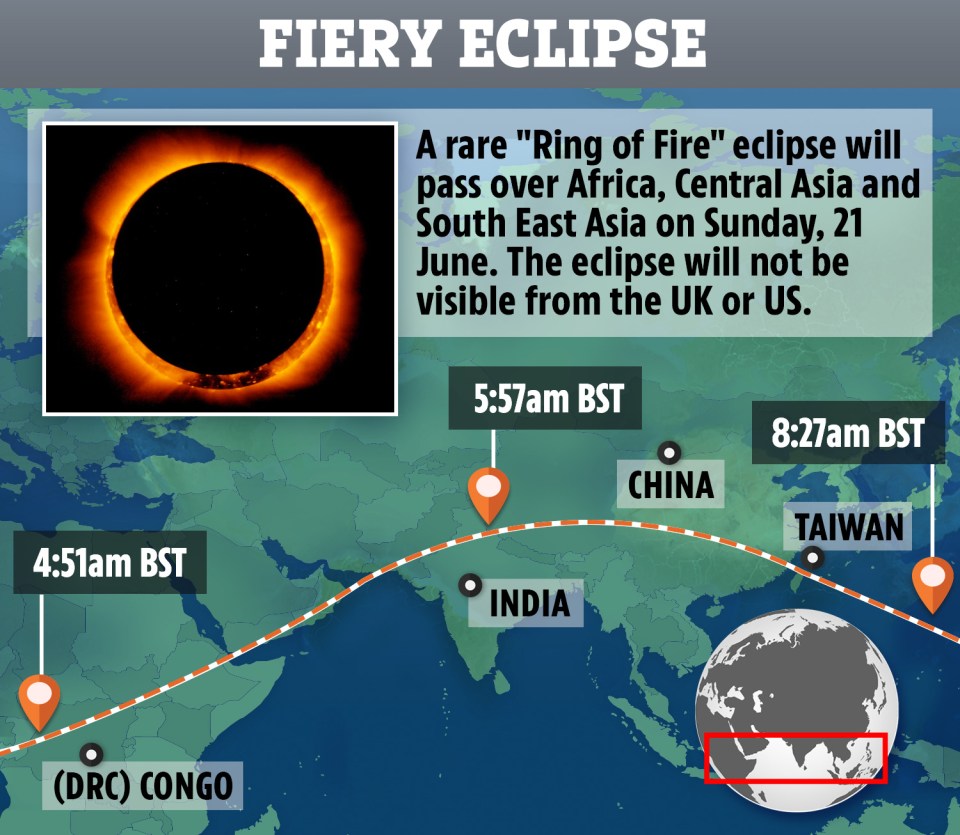 This is when the Moon moves in front of the Sun, but doesn’t totally block it.

It means the centre of our nearest star is blocked out, but the edges are still visible – creating a “Ring of Fire” in the sky.

This bright orange ring is known as an annulus, hence the name, annular solar eclipse.

Annular or ‘Ring of Fire’ eclipses occur when the Moon moves in front of the Sun, but doesn’t totally block it[/caption]

“An annular eclipse occurs instead of a total eclipse when the Moon is on the far part of its elliptical orbit around the Earth,” Nasa explains.

“Remember to never look directly at the Sun even during an eclipse.

How long will the solar eclipse last?

You’ll be able to see the beginnings and aftermath of the eclipse for about six hours.

But the actual “Ring of Fire” will only be visible very briefly.

This occurs when the eclipse is at its most perfect positioning, and will last for just a few minutes.

Where can you see the solar eclipse?

The bad news is that you won’t be able to see the eclipse from the US or UK.

That’s because the eclipse will take place in the middle of the night for the Americas, Britain and much of western Europe.

The eclipse will begin above the Republic of Congo at roughly 4:51am BST and end above the Pacific Ocean at about 10:28am BST.

Unfortunately, Sunday’s eclipse will not be visible from the US or UK, but it will be live-streamed for free online[/caption]

The event will be visible across an area spanning hundreds of miles, according to Nasa.

“You can be hundreds of miles from the theoretical point of Greatest Duration [magenta line on the map] and still enjoy annularity lasting within a fraction of a second of the maximum possible,” Nasa said on its website.

“It’s much more important to watch the weather forecasts a day or two before the eclipse and choose a location with the best chance of a cloud-free sky during the eclipse.

“Good weather is the key to successful eclipse viewing – better to see a shorter eclipse from clear sky than a longer eclipse under clouds.”

Can you watch the solar eclipse online?

In general, we see annular eclipses about every year or two[/caption]

Yes! Anyone with a decent internet connection can watch the entire eclipse online.

Both Timeanddate.com and space agency Nasa will be streaming the event on their respective YouTube channels.

Nasa also has an interactive online map that shows stargazers where the eclipse will appear and at what times.

When is the next solar eclipse?

Solar eclipses are fairly common, with between two and five happening every year. A total eclipse happens around once every 18 months.

The next eclipse is a total solar eclipse, which takes place on December 14, 2020.

What is a solar eclipse?

In other news, a solar eclipse plunged South America into darkness earlier this year.

Stargazers will also want to check out our guide for when to spot every lunar eclipse until 2030.

And read about the space mysteries Nasa still can’t explain.

Will you be checking out the June solar eclipse? Let us know in the comments!

Asteroid over three times the size...