NASA has shared an image of rare ‘red sprite’ lightning that looks scarily similar to an alien invasion.

The red lightning can be seen branching out like jellyfish or fireworks over a French mountain range.

The amazing image was captured by photographer Stephane Vetter.

Nasa revealed it as there Astronomy Picture of the Day for July 4.

Nasa said: “A sensitive video camera on a summit of the Vosges mountains in France captured these surprising fireworks above a distant horizon on June 26.

“Generated over intense thunderstorms, this one about 260 kilometers away, the brief and mysterious flashes have come to be known as red sprites.

“The transient luminous events are caused by electrical breakdown at altitudes of 50 to 100 kilometers.

“That puts them in the mesophere, the coldest layer of planet Earth’s atmosphere.”

Nasa also pointed out the faint silver lines you may have also spotted in the image.

The US space agency explained: “On the right, the video frames have captured another summertime apparition from the mesophere.

“The silvery veins of light are polar mesospheric clouds.

“Also known as noctilucent or night shining clouds, the icy clouds still reflect the sunlight when the Sun is below the horizon.”

Nasa previously shared another image of the strange natural phenomenon that was also taken by Stephane Vetter.

That photo shows the red sprite lightning in much more detail.

Red sprites are electrical discharges that can occur high above clouds during a thunderstorm.

They are usually triggered when a positively charged lightning bolt from a cloud below hits the ground.

Recorded sightings of the jelly-fish like sprites date back to at least 1886.

In other news, an epic lightning flash over Brazil has just been labelled as the single longest lightning bolt ever recorded.

What do you make of these lightning photos? Let us know in the comments… 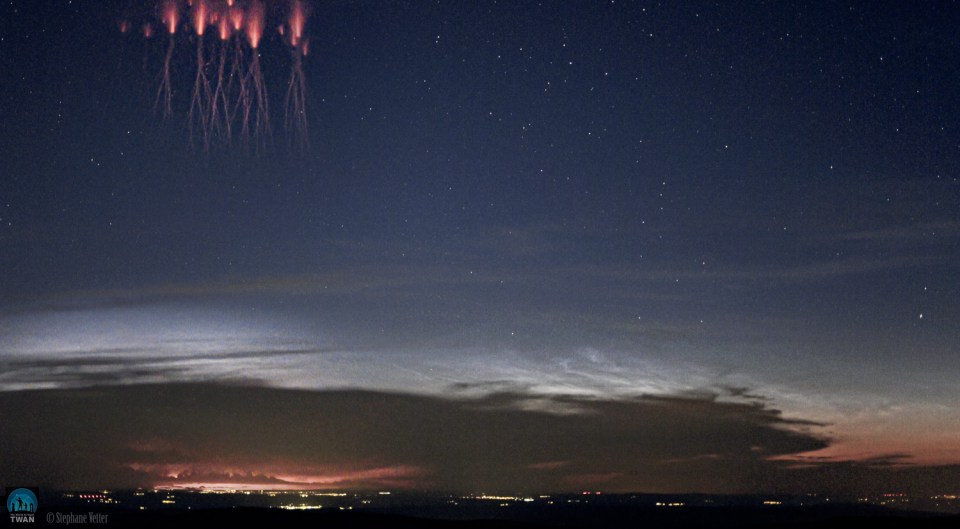 WhatsApp to STOP working on so...

How to transfer WhatsApp data...