NASA has shared a stunning image of a comet looking like it’s about to crash into our planet.

Luckily for us, Comet Neowise is just heading past Earth at the moment and is becoming more visible as it gets closer.

Nasa said: “A comet has suddenly become visible to the unaided eye.

“Comet C/2020 F3 (NEOWISE) was discovered in late March and brightened as it reached its closest approach to the Sun, inside the orbit of Mercury, late last week.

“The interplanetary iceberg survived solar heating, so far, and is now becoming closer to the Earth as it starts its long trek back to the outer Solar System.

“As Comet NEOWISE became one of the few naked-eye comets of the 21st Century, word spread quickly, and the comet has already been photographed behind many famous sites and cities around the globe.

The comet is heading past Earth[/caption]

The comet pictured over Northumberland in the UK this morning[/caption]

Nasa shared the image as its Astronomy Picture of the Day.

It was captured by photographer Maroun Habib as they viewed the comet above Lebanon before sunrise just two days ago.

Nasa added: “The future brightness of Comet NEOWISE remains somewhat uncertain but the comet will likely continue to be findable not only in the early morning sky, but also next week in the early evening sky.”

The comet is set to reach its closest point to Earth on July 23.

It should be visible from the northern hemisphere this month, which includes the UK and the US.

It’s currently said to be visible from mid-northern latitudes just before sunrise and after sunset. 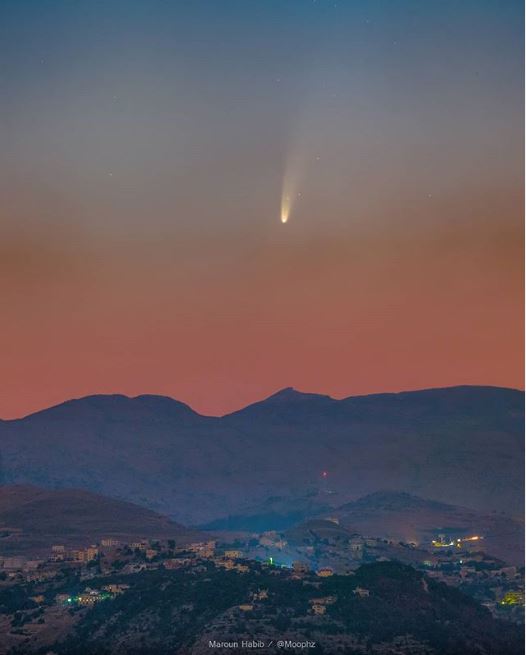