HUMANITY has been launching stuff into space for more than six decades – and it’s becoming a problem.

Millions of bits of junk circling our planet threaten to trigger a catastrophic cascade of collisions that could knock out working satellites, one scientist tells The Sun.

Space junk is becoming a major head-scratcher for scientists[/caption]

If this were to continue unchecked, it could take down communication systems and render parts of space inaccessible.

Some experts have even suggested a further build up of debris could trap humanity on Earth because rocket launches would become too dangerous.

The solution? Send up giant nets that can snatch debris out of orbit, while ensuring future satellites have self-destruct systems.

“We’ve basically been launching things since 1957, and in the early decades, there wasn’t any sense that this might become a major environmental problem,” Dr Alice Gorman, of Finders University in Australia, told The Sun.

Roughly 35,000 objects larger than 10cm are currently in orbit, she added, on top of millions upon millions of smaller fragments.

“Because it’s moving at very high speed, the collision of space junk could destroy or disable functioning spacecraft that we rely on for Earth observation, communications and navigation,” Dr Gorman said.

Every collision would create more junk, leading to a scenario proposed by Nasa scientist Donald Kessler in 1978 known as Kessler Syndrome.

“The debris would keep increasing,” Dr Gorman added. “Then it would be too dangerous to launch [rockets and other spacecraft] at all.”

So how did we get here? Over the past few decades, humanity has ramped up how much tech it fires into Earth’s orbit, with little or no checks on what goes up there – or whether it comes back down.

While there are roughly 2,300 active satellites orbiting Earth at the moment, there are also 3,000 dead ones littering space.

SpaceX, the California rocket firm run by billionaire Elon Musk, has sent up hundreds of satellite this year alone in its mission to set up a WiFi network that beams the internet to people from space.

Called Starlink, the project aims to station as many as 42,000 satellites in low-Earth orbit in the future. 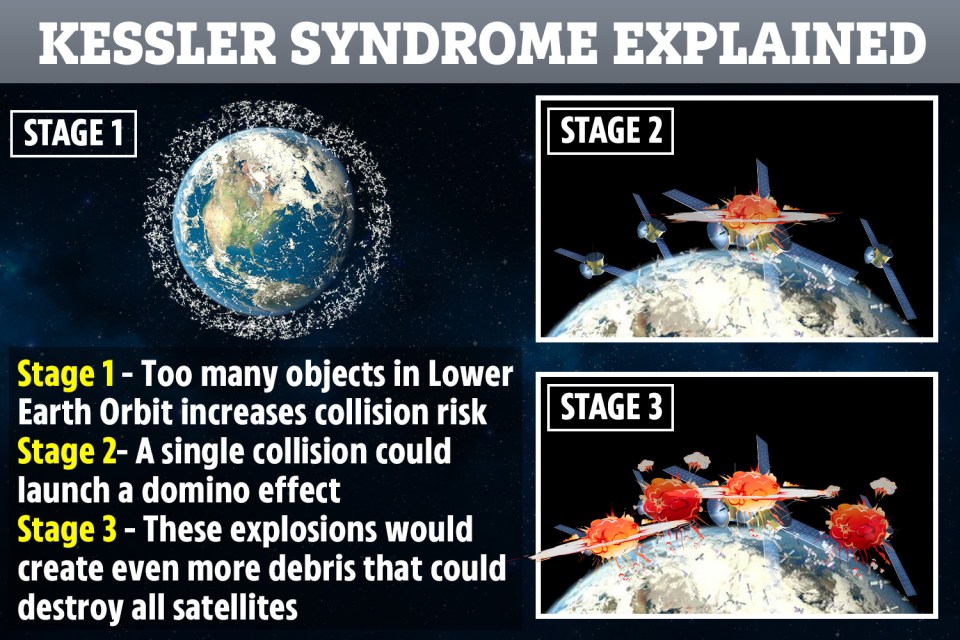 The key problem, Dr Gorman says, is a lack of oversight.

“There isn’t currently any sort of international regulatory regime to manage space traffic and stop this happening,” she told The Sun. “There are very few active measures or agreements.”

That hasn’t stopped space bodies such as the European Space Agency (ESA) from tracking debris as it builds beyond our atmosphere.

ESA, which is based in Paris, last month released its annual report on space debris, concluding that the risk of dangerous collisions is on the rise.

More than 500 break-ups, explosions, collisions, or other events resulting in the release of tiny fragments of debris were logged by investigators.

“Despite measures being in place for years to prevent this, we see no decline in the number of such events,” said Holger Krag, Head of the Space Safety Programme at ESA.

One close shave between a defunct Russian satellite and spent Chinese rocket part in October could have caused billions in damages in what scientists said would have been the “worst space collision in history”.

It’s not all bad

While there is plenty to worry about when it comes to our litter-strewn orbit, space debris also has plenty to teach us.

As a space archaeologist, Dr Gorman looks at how some pieces of junk are artefacts that form an important part of our recent history.

“The dominant idea is that we should treat space junk as, well, junk,” Dr Gorman told The Sun.

“The assumption is that once a spacecraft is no longer in use, it has no value. My take on this is that some pieces of junk have heritage value.”

What that means is that a handful of defunct satellites or ejected rocket parts – like tools thrown away by cavemen thousands of years ago – remain important to humanity long beyond their expiry dates.

“We shouldn’t just be saying ‘oh it’s all junk and got no use’,” according to Dr Gorman.

“We should have some strategy that means we don’t just destroy everything, and keep what’s valuable.”

Others have suggested enforcing satellite operators to push defunct satellites into our atmosphere once they’re done – where they’ll safely disintegrate.

Whatever they cook up, Dr Gorman is pushing to keep hold of any debris that isn’t a danger to other spacecraft. She believes they belong in museums.

“These objects represent the changing state of technology. Some of them are quite beautiful.”

WOOD YOU BELIEVE IT

In other news, SpaceX is set to send four astronauts into orbit tomorrow as part of an historic mission to the International Space Station.

SpaceX boss Elon Musk wants to send humans to Mars as early as 2024 aboard the firm’s huge new Starship rocket.

What do you think of the space debris conundrum? Let us know in the comments! 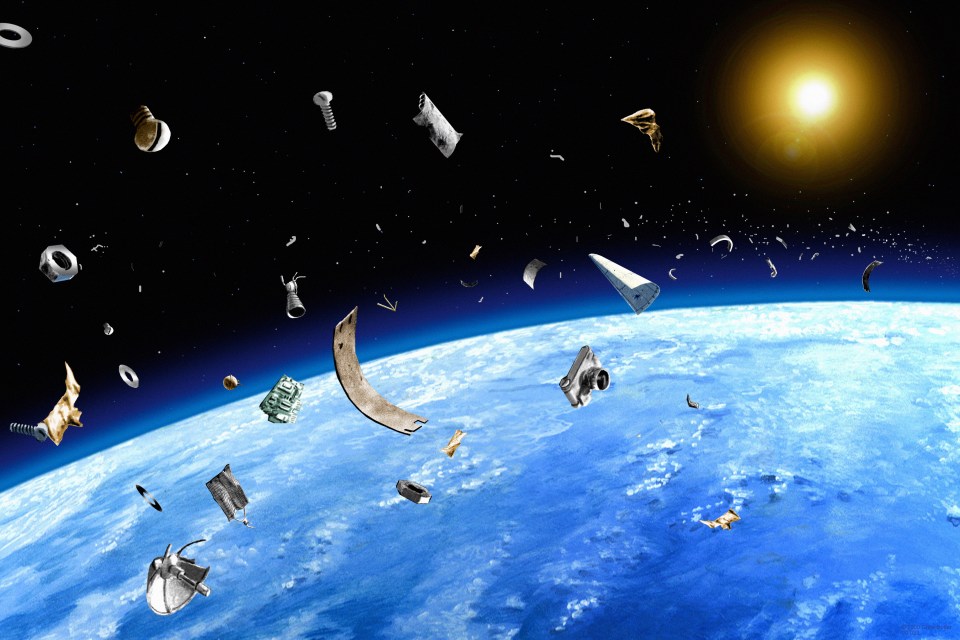