THE REMAINS of the oldest known shark victim reveal he died 3,000 years ago when his leg was bitten off.

Fresh analysis of his skeleton shows he received around 800 wounds in the deadly encounter.

The victim was found in Japan[/caption]

The remains where found at the Tsukumo Shell-mound archaeological site near the Seto Inland Sea.

The Seto Inland Sea is the body of water that separates three of the four main islands of Japan.

The bones were first discovered in the 20th century but a cause of death was never agreed upon.

He has around 800 injuries from the brutal attack[/caption]

They said: “We were initially flummoxed by what could have caused at least 790 deep, serrated injuries to this man. There were so many injuries and yet he was buried in the community burial ground, the Tsukumo Shell-mound cemetery site.

“The injuries were mainly confined to the arms, legs, and front of the chest and abdomen. Through a process of elimination, we ruled out human conflict and more commonly-reported animal predators or scavengers.”

The skeleton, called Tsukumo No. 24, is missing his left hand and right leg.

His left leg was found in an inverted position.

He could have been placed this way when he was buried back on land.

Other marks on the skeleton do not match injuries that could be sustained with stone tools.

Shark attacks aren’t often seen in the archaeological record but the injuries weren’t really consistent with anything else.

The researchers said: “Given the injuries, he was clearly the victim of a shark attack.

“The man may well have been fishing with companions at the time, since he was recovered quickly. And, based on the character and distribution of the tooth marks, the most likely species responsible was either a tiger (Galeocerdo cuvier) or white shark (Carcharodon carcharias).”

Further analysis revealed the man was middle aged and lived around 1370 to 1010 BC.

Experts think he was recovered from the water shortly after the attack and buried in a cemetery.

It’s thought he would have died quickly due to bites on his femoral arteries, meaning he could have lost one fifth of all his blood.

The researchers concluded: “The attack on Tsukumo No. 24 highlights the risks of marine fishing and shellfish diving or, perhaps, the risks of opportunistic hunting of sharks drawn to blood while fishing.

“Humans have a long, shared history with sharks, and this is one of the relatively rare instances when humans were on their menu and not the reverse.”

This study has been published in the Journal of Archaeological Science: Reports.

In other archaeology news, a mysterious tomb just a few miles from Dublin is older than the Pyramids of Giza and continues to baffle scientists.

The first humans to set foot on the North American continent could have arrived 30,000 years ago, according to new evidence.

And, the mystery surrounding the age of the Cerne Abbas Giant may have finally been solved. 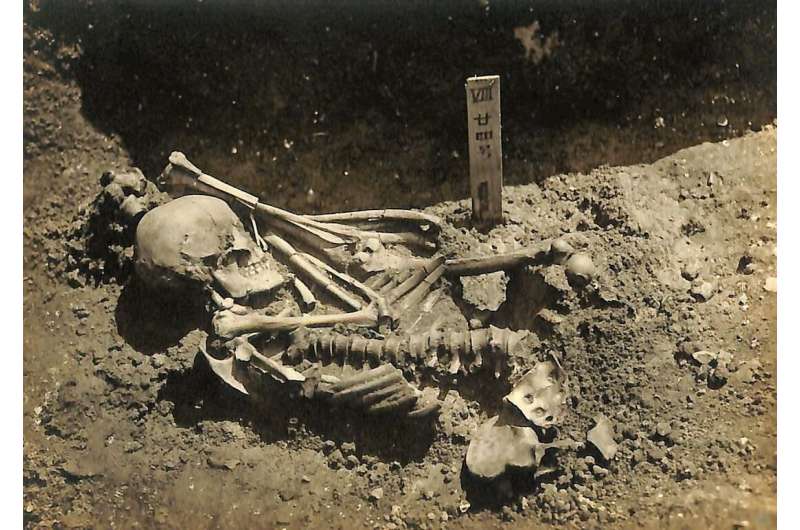