The Arecibo space telescope which featured in the James Bond movie GoldenEye collapsed in Puerto Rico after mounting safety concerns.

The footage was captured by drone[/caption]

The space telescope collapse was filmed from different angles[/caption]

One of the largest telescopes in the world, the observatory’s 900-ton instrument platform fell 450ft onto the reflector dish below on December 1, creating a devastating hole in the structure.

In the footage you can see parts of the structure come crashing down and hear the roar of the impact.

The shocking video was released by US National Science Foundation.

Jonathan Friedman, a worker at the facility for 16 years, said:”It sounded like a rumble. I knew exactly what it was.

“I was screaming. Personally, I was out of control… I don’t have words to express it. It’s a very deep, terrible feeling.” 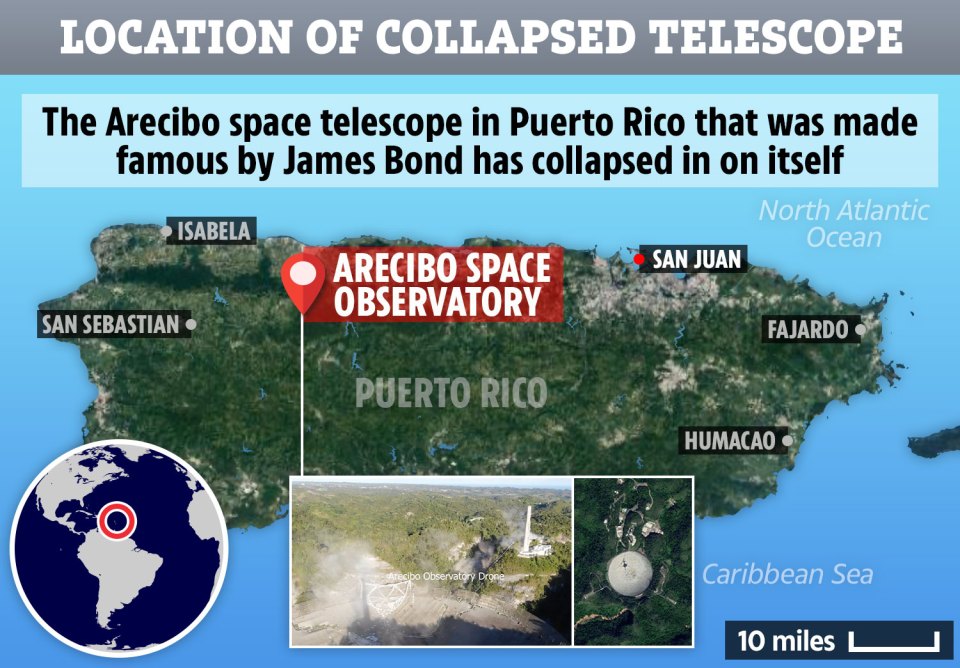 The Arecibo telescope become well-known for its use in films including the 1995 James Bond movie GoldenEye and the 1997 sci-fi film Contact, with Matthew McConaughey.

The telescope has been a vital instrument for radio astronomers for 57 years.

The US National Science Foundation said it was “saddened” by the collapse and would look for ways to help “the scientific community and maintain our strong relationship with the people of Puerto Rico”.

The monumental crash came just weeks after officials decided to dismantle the telescope over safety fears.

Two cables which held the weighty viewing platform had broken since August, forcing officials to close the site.

Researcher Jonathan Freidman said he had a “very deep, terrible feeling” after he heard the crash[/caption]

Last month, it was warned the telescope was “at risk of catastrophic collapse” and that repairs could pose a deadly risk to construction workers.

The NSF said in a statement: “Initial findings indicate that the top section of all three of the… telescope’s support towers broke off.

The NSF added: “Top priorities are maintaining safety at the site, conducting a complete damage assessment as quickly as possible, and taking action to contain and mitigate any environmental damage caused by the structure or its materials.

“While the telescope was a key part of the facility, the observatory has other scientific and educational infrastructure that NSF will work with stakeholders to bring back online”

No injuries were reported after the crash and an investigation has been launched to find out what happened.

The famous telescope was built in the 1960s with the aim of studying the ionised upper part of the Earth’s atmosphere.


Mysterious ‘ghostly circles’ found looming in space – they could be WORMHOLES

It quickly became an all-purpose radio observatory – and found the first evidence for an object known as a neutron star.

The telescope has also been used to listen for intelligent life elsewhere in the cosmos and to track near-Earth asteroids.

But the telescope may be best known for featuring in the 1995 GoldenEye film – when Pierce Brosnan made his debut as the special agent.

In investigation into the collapse is ongoing[/caption]

Sci-Fi designs for cities on Mars...

Half of Brits would rather buy a n...