SAMSUNG has created a ‘cockpit of the future’ for semi-driverless cars – and it looks seriously cool.

The driver and passengers will enjoy 5G internet, a giant TV, touchscreens, de-stressing tech and a tiredness-monitoring system.

Is this what a next-gen car will look like?[/caption]

As cars do more of the driving for us, the more entertainment we can start to cram into cars.

Motor giants are racing to tech-ify their cockpits, and Samsung has worked with Harman to create a vision of that that might look like.

For a start, you get a giant 49-inch QLED display in front of the wind-screen.

That means you can watch a movie or make video calls while the car drives for you.

When the car is moving, this will only rise halfway up – so you can still check out the views ahead.

And because the car supports 5G internet, you’ll get flawless streaming while you drive.

“The Digital Cockpit 2021 was designed with a focus on simplifying communication and delivering fun on-the-go experiences,” Samsung explained.

Samsung reckons the car can work as a mobile offers, with tools for video conferencing and even editing movie clips.

And there’s a built-in health service that monitors your wellness.

Your stress levels will be tracked, and then alleviated by changes to the vehicle’s lighting, scent and music.

Samsung gadgets will also analyse your sleep patterns outside of the car – as well as the movement of your eyelids – to work out if you’re too tired to drive without assistance.

There’s a display on the rear-centre armrest with a touch-pad that lets passengers control features in the car.

In the middle of the steering wheel is a driver-exclusive 8.8-inch touchscreen.

This lets you activate turn signals and honk the horn, as well as control music or video.

Speakers are installed into the headrest of each seat, and there’s even an outside screen so you can watch TV when not in the car – like if you’re camping.

The car comes with a 360-degree camera and sensor system to roads, walkways, pedestrians and other vehicles.

There’s a display in the top-centre of the windshield with info like traffic signals, road signs and weather.

You could use the car as a rolling office[/caption]

And the horn of the car is designed to emit a softer sound to reduce noise pollution.

Of course, Samsung’s sci-fi motor isn’t a real car – and won’t be made into an actual vehicle as far as we know.

“Samsung is bringing us closer to making that exciting future a reality,” the South Korean tech giant said.

In other news, this is what the long-rumoured Apple Car could look like.

And Apple may have teamed up with Hyundai to produce an electric car. 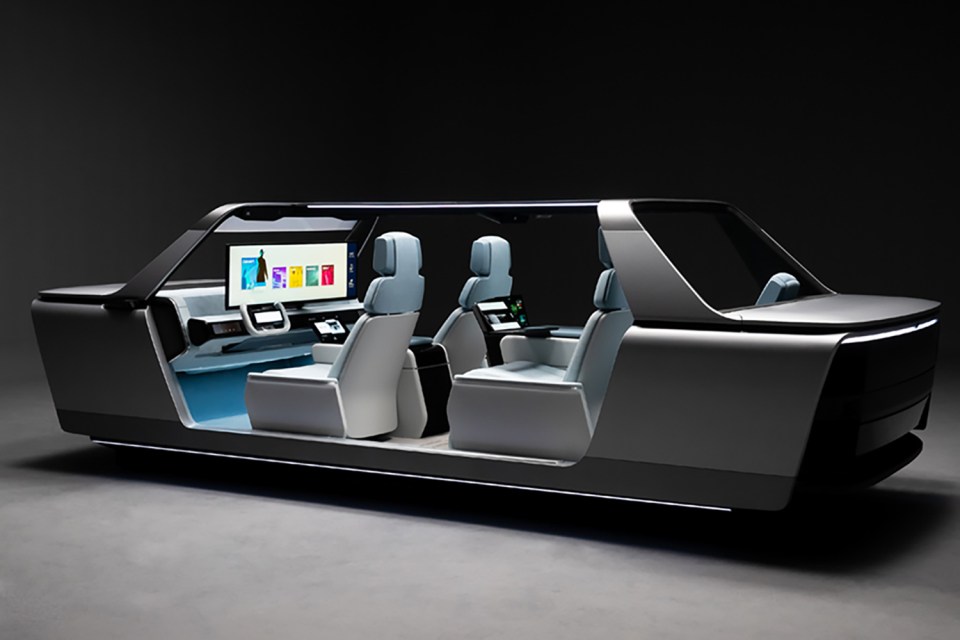