Close
Trending News
HomeTechSamsung Galaxy S21 vs iPhone 12 – specs, price and which is best for you?

Samsung Galaxy S21 vs iPhone 12 – specs, price and which is best for you?

Samsung Galaxy S21 vs iPhone 12 – specs, price and which is best for you?

SAMSUNG’S unveiled its latest smartphone on Thursday, with the pricey mobile sporting a gorgeous display and enviable camera system.

But how does the Galaxy S21 line up against Apple’s iPhone 12 and iPhone 12 Pro? Read on to find out.

What are the new Samsung smartphones?

The mobiles all boast 5G connectivity and curious designs featuring rear camera bumps that merge with the chassis.

The cheapest of the trio is the Samsung Galaxy S21, which boasts a 6.2-inch AMOLED display housed within a metal frame.

Samsung has opted for a retro, flat-edged design as opposed to the pebble-like silhouettes of old – much like Apple did for the iPhone 12.

The Galaxy S21+ features many of the same specs but comes in slightly larger, with a 6.7-inch display.

Those willing to splash a bit of extra cash for all the bells and whistles can opt for the Galaxy S21 Ultra.

The S21 series ships later this month and will be going toe-to-toe with the iPhone 12 range, which Apple released last year.

For the purposes of this comparison, we’ll be stacking the S21 against the iPhone 12 and iPhone 12 Pro, as they come closest in terms of their pricing.

The base S21 is the cheapest of Samsung’s new mobiles and will most likely end up as the best selling gizmo of the trio.

Samsung says its improved the camera and performance of the mobile over last year’s Galaxy S20.

Its three rear cameras mean its got an extra snapper over the iPhone 12, and it features a similar “night mode” for snapping photos in the dark.

The £799 iPhone 12 is at the cheaper end of Apple’s flagship mobiles, and as such has slightly diminished specs.

Apple said the mobile also features Night Mode – the AI-powered technology that lets you take great photos in the dark.

The £999 iPhone 12 Pro is the same size as the iPhone 12 but with slightly better specs.

It also supports 5G but houses three rear cameras, adding a telephoto lens to the main and ultrawide camera sported by the iPhone 12.

The screen is the same is the iPhone 12’s, and it’s powered by the same A14 chip – Apple’s powerful new phone engine.

With specs that line up pretty similarly, it’s tough to call which phone is best for you.

As far as the specs go, if battery life or a wallet-friendly price tag top your list of priorities, then the iPhone 12 is the way to go.

If a camera is more your priority but you don’t want to drop a grand on a phone, then gun for the Galaxy S21.

All in all, we’d suggest sticking to the operating system you know best.

If you’re an avid Android fan, then the Samsung is your best bet, while iOS nuts should stick to one of Apple’s handsets.

In other news, Samsung’s unveiled a robot butler this week that lays your table, pours you a beer and cleans the dishes.

Here’s our review of the iPhone 12, Apple’s first 5G mobile.

And, here’s how to find out if you can access 5G in your area.

What do you think of Samsung’s new mobiles? Let us know in the comments! 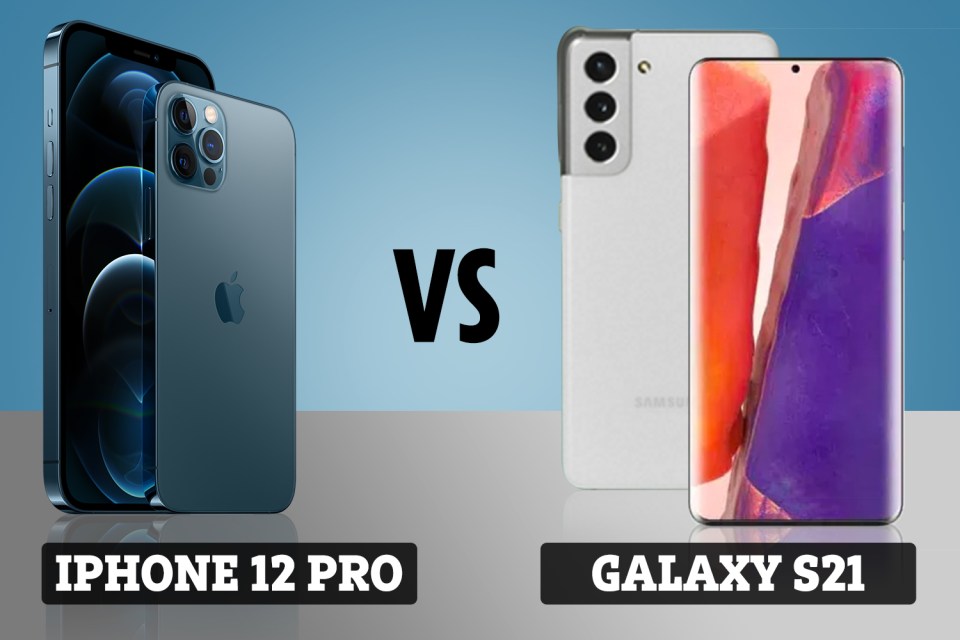