RUSSIA has successfully tested an “unstoppable” nuclear missile that can fly through the air at more than 6,000mph (9,600kph).

The hypersonic weapon was fired from a naval ship in the White Sea, north of Russia, this week to celebrate President Vladimir Putin’s 68th birthday. 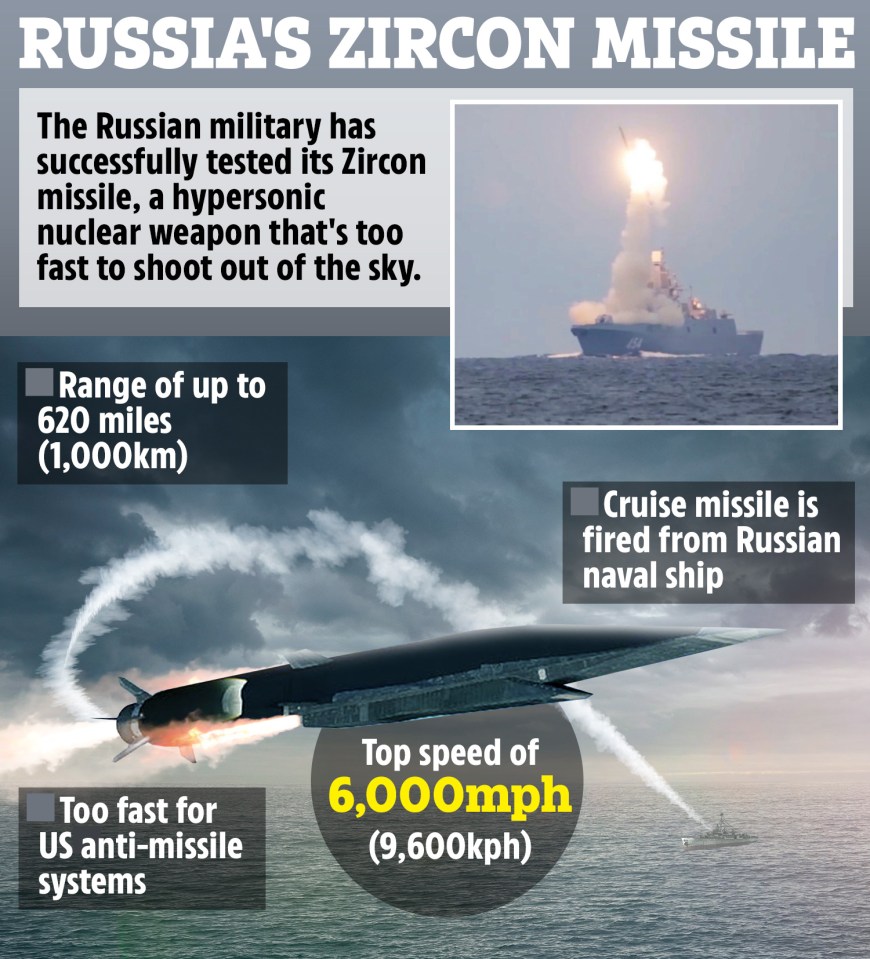 The Russian military reported the successful test launch on Wednesday, marking a major shift in escalating nuclear tensions with the West.

Known as Zircon, the nuke is said to travel faster than the speed of sound, making it too quick for US and UK anti-missile systems.

Speaking to Putin via a video call, Russian General Staff chief Valery Gerasimov said the test launch was carried out Tuesday from the Admiral Groshkov frigate.

The missile successfully hit a target 280 miles (450km) away in the Barents Sea, Gerasimov said. It took just just 270 seconds to get there.

Putin praised the successful test as a big event for Russia.

“Equipping our Armed Forces the army and the navy with the latest, truly unparalleled weapon systems will certainly ensure the defense capability of our country in the long term,” the president said.

The Zircon – or Tsirkon – has been identified by Moscow’s state-controlled TV as Putin’s weapon of choice to wipe out American cities in the event of nuclear war.

Putin talked about the coming deployment of the new hypersonic missile for the Russian navy in 2019.

A Russian Zircon missile launches from the Admiral Groshkov frigate in the White Sea, north of Russia, on Tuesday[/caption]

The weapon is said to travel at more than 6,000mph, making it too fast for US anti-missile systems[/caption]

Speaking on Wednesday, Putin called the launch “a great event not only in the life of the Armed Forces, but also in the whole of Russia”.

The deadly missile is “the newest, truly unparalleled weapon system in the world” ensuring “the defence capability of our state”, he added.

Zircon missiles – also known as Tsirkon – have been in development for over 20 years and are considered a key next step for Putin’s arsenal.

Artist impression of the Zircon missile. The US is also working on hypersonic missile technology[/caption]

The weapons are designed to attack both ships and ground targets, and will be loaded onto Russia‘s newest frigates as early as 2021.

A radiation leak during a military accident which killed two and wounded six last year is believed to have involved a test of the Zircon missile.

Radiation levels temporarily soared 20 times above the normal level in Severodvinsk, a city lying some 18 miles (29km) from the weapons testing site at Nyonoksa, according to Greenpeace citing the Russian Emergencies Ministry.

Putin has openly encouraged his armed forces to develop new weapons as part of a hypersonic arms race with the West.

Currently, the Royal Navy’s Sea Ceptor can shoot down missiles travelling at 2,300 mph, which is nowhere near Zircon’s capabilities.

The “enemy will not have enough time to get scared let alone react”, according to military website Strategic Culture.

Dmitry Kiselyov, presenter of Russia’s main weekly TV news show Vesti Nedeli, last year showed on screen a map of the US identifying targets he claimed Moscow would want to hit in a nuclear war.

Kiselyov, seen as a top Putin propagandist, said the Zircon missile could hit the targets in less than five minutes.

In other news, the US military is developing a laser can ID terrorists by scanning their heartbeats from 650 feet away.

The US’s $550million nuke bomber plane that can hide from Russian and Chinese missiles is nearly ready.

And, the US Navy Seals and Royal Marines are looking to kit out their special forces with 50mph Iron Man-style jet packs.

What do you think of Russia’s new weapon? Let us know in the comments!