BRIT engineers have smashed the world record for the fastest internet speed, clocking a monster 178 terabytes (178,000 gigabytes) per second.

That’s quick enough to download 22million HD photos in less than a second, or the entire Netflix library in under half a minute. 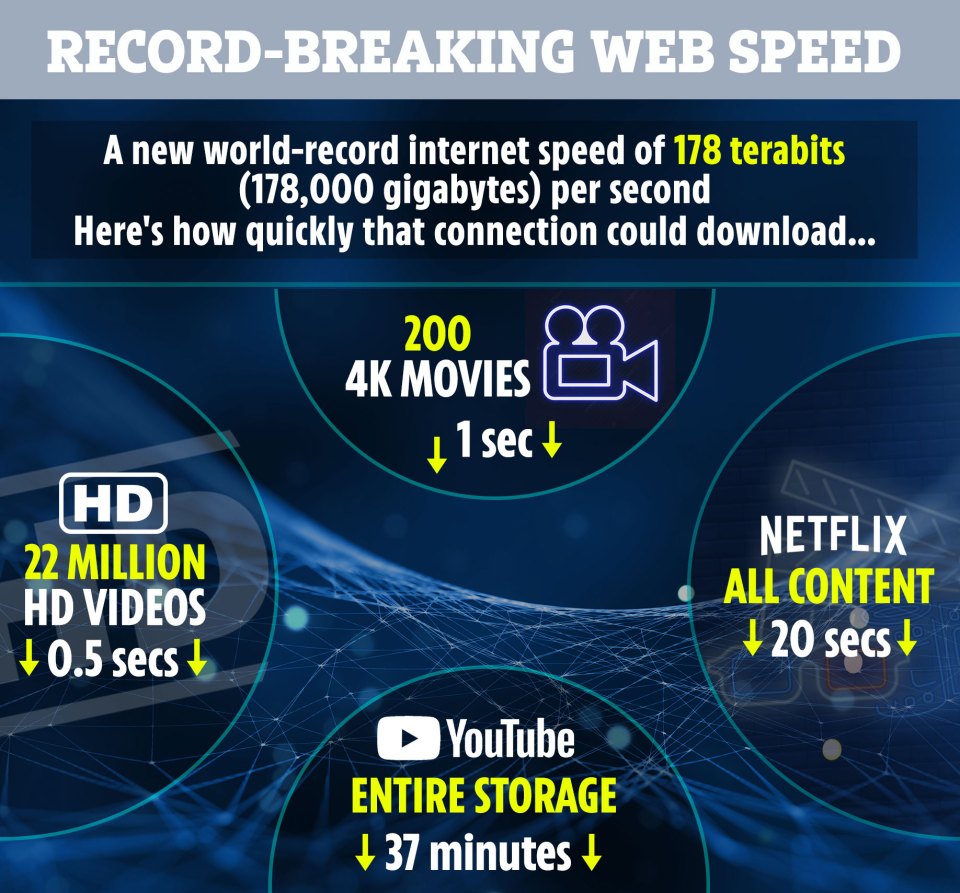 Researchers at University College London, where the tech was developed, say it’s double the capacity of any system currently deployed in the world.

It’s 17,800 times faster than the speediest connections available to consumers – roughly 10 gigabytes (GB) per second in parts of Japan.

The team hopes faster broadband technology will help keep the price of rapid web access down for netizens of the future.

The technology is quick enough to download 22million HD photos in less than a second, or the entire Netflix library in under a minute[/caption]

“This whole growth in data demand is related to the cost per bit going down.”

He added: “The development of new technologies is crucial to maintaining this trend towards lower costs.”

At 178 terabyes per second, the new record, demonstrated in a UCL lab, is 20 per cent faster than the previous world record, held by a team in Japan.

If that data connection were wired to your home broadband, it would give you the power to download more than 220 4K-quality movies in a second.

The entire storage capacity of YouTube, thought to be around 400,000 terabytes, would take just 37 minutes to download.

It would take just 20 seconds to gobble up the entire library of Netflix, believed to take up about 3,600 terabytes of space.

Experts achieved the feat by transmitting data through a much wider range of colours of light than is typically used in optical fibre broadband.

According to UCL, the benefit of the system is that it can be deployed on existing infrastructure by simply upgrading parts of the network.

The technology is a long way off getting into the hands of consumers but could be used in laboratories that churn through lots of data.

It could also aid supercomputers designed to process data in the fight to discover new life-saving drugs, or predict the weather.

Dr Galdino added that the system could also pave the way for as yet unthought-of applications “that will transform people’s lives”.

The research was published in IEEE Photonics Technology Letters.

In other news, Netflix has a new Shuffle button that chooses what to watch for you.

Twitter has just experienced its largest and most dramatic hack.

And, Snapchat is testing a new explore feature that could make it a lot more similar to TikTok.

What do you think of the record-breaking internet speed? Let us know in the comments!