TWO Nasa astronauts have embarked on a spacewalk from the International Space Station and you can watch them live.

They ran into some slight trouble early on when they lost one of their wrist mirrors but things soon got back on track.

As astronaut Chris Cassidy was exiting the airlock, his wrist mirror floated away.

He reported that this latest piece of space junk moved away from him at about a foot per second.

Mission Control wasn’t sure how the mirror could have detached from the suit.

Astronauts have mirrors on their spacesuit wrists so they can get better views while working.

.@NASA TV goes live Friday at 6am ET to broadcast a spacewalk starting at 7:35am with @Astro_Seal and @AstroBehnken. More… https://t.co/59CFaYK1Z6 pic.twitter.com/F5inOltOnC

Fortunately, this mirror loss was deemed as not risky to any of the crew or the mission.

Cassidy observed no damage to his suit.

The walk is the first spacewalk of two missions to replace some ageing batteries.

Nasa spacewalk: What is it and which astronauts are walking?

Nasa astronauts Chris Cassidy and Robert Behnken have gone on a spacewalk today to replace old nickel-hydrogen batteries outside the ISS.

Behnken’s name may sound familiar because he was one of the astronauts on SpaceX’s first manned launch to the ISS back in May.

Nasa said: “The spacewalking astronauts will replace aging nickel-hydrogen batteries for one of two power channels on the far starboard truss (S6 Truss) of the station with new lithium-ion batteries that arrived to the station on a Japanese cargo ship last month.

Who’s ready for a spacewalk? pic.twitter.com/XcVAVmcg5T

“The battery replacement work is the culmination of power upgrade spacewalks that began in January 2017.”

Battery replacement up in space is a very complex job.

Since 2017, ISS astronauts have been working to replace 48 of them.

Nasa spacewalk: Date, start time and how to watch

The spacewalk itself was scheduled to begin at 11:35am GMT (7:35am EDT) but the astronauts weren’t officially on the walk until around 12:30pm GMT.

They’ll be plenty of time to watch it as it could last as long as seven hours.

Astronaut Cassidy is wearing a spacesuit with red stripes.

Behnken is in a spacesuit without stripes.

In other space news, alien life may be lurking in hidden Earth-like ocean on nearby Jupiter moon Europa.

Will you be watching the spacewalk? Let us know in the comments… 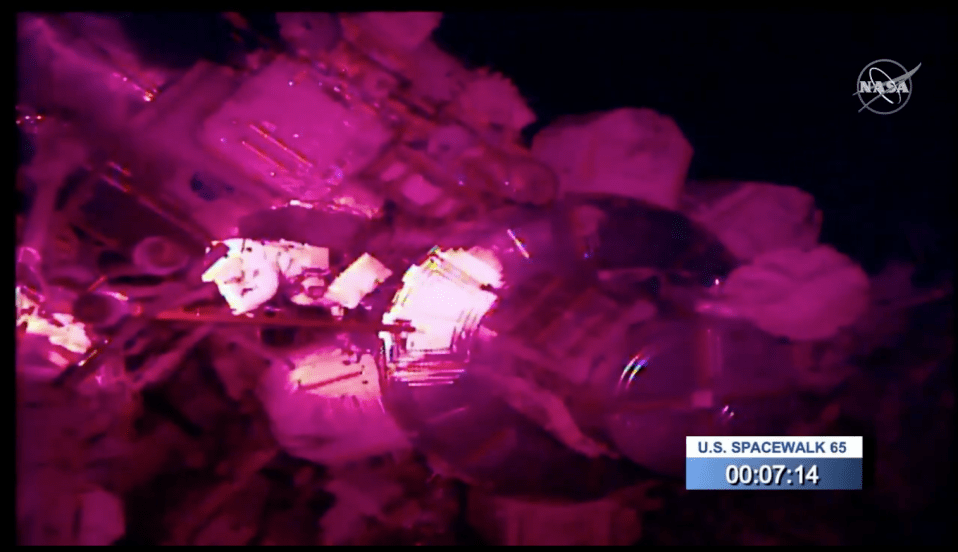 WhatsApp will be blocked on MI...