ANCIENT asteroid Bennu contains the ingredients for life, according to Nasa experts.

The US space agency’s OSIRIS-REx spacecraft is getting ready to sample the space rock’s surface on October 20. 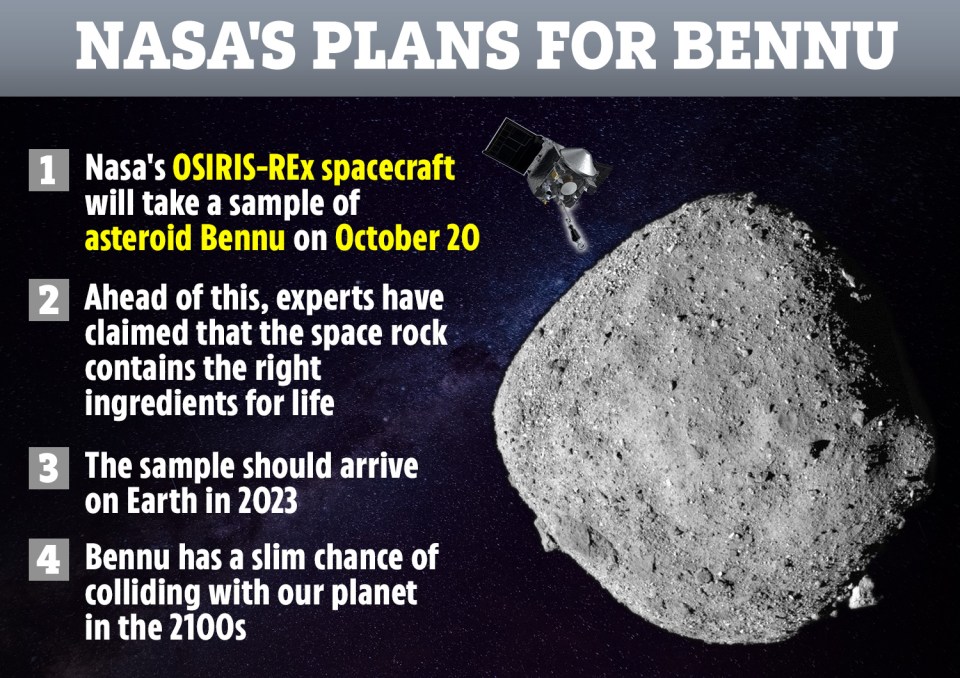 Ahead of the sampling, experts have been piecing together what they think they know so far about the near Earth asteroid.

“They also suspect that the delivered sample of Bennu may be unlike anything we have in the meteorite collection on Earth.”

The researchers relied on high resolution mapping that has been done around Bennu since a spacecraft began to orbit it back in 2018.

It’s hope that their work will fill in crucial gaps in our understanding of asteroids.

Nasa claims Bennu hosts ingredients that we know are essential for life on Earth.

It said: “One of the papers, led by Amy Simon from NASA’s Goddard Space Flight Center in Greenbelt, Maryland, shows that carbon-bearing, organic material is widespread on the asteroid’s surface, including at the mission’s primary sample site, Nightingale, where OSIRIS-REx will make its first sample collection attempt on October 20.

“These findings indicate that hydrated minerals and organic material will likely be present in the collected sample.

“This organic matter may contain carbon in a form often found in biology or in compounds associated with biology.

“Scientists are planning detailed experiments on these organic molecules and expect that the returned sample will help answer complex questions about the origins of water and life on Earth.”

There is a theory that life on Earth started because of an asteroid impact bringing water and the right organic molecules.

There’s also slight concern that an asteroid like Bennu could end lives on Earth.

Bennu is a possible security risk for our planet as there’s a 1 in 2,700 chance it could collide with us in the 2100s.

This may be a slim chance but it makes studying the asteroid even more important.

Bright ‘veins’ on the asteroid’s boulders are also being used to suggest Bennu formed when a larger watery asteroid was smashed into and broken up.

The water could have created the veins and left behind the patterns we can still see today.

In less than two weeks Nasa’s probe will be taking a sample of 60 grams of loose rock from Bennu.

This will then be flown back to Earth and is expected to arrive in 2023.

Then we should be able to unravel some of the mystery surrounding the asteroid and its origins. 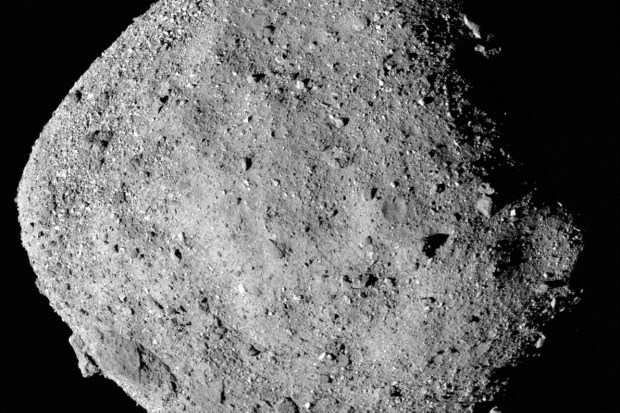 The US Space Force will one day send humans into space and could set up its own Moon base staffed by robots, a US General has confirmed.

What are your thoughts on Bennu? Let us know in the comments…