Dubbed the South Atlantic Anomaly (SAA), the mysterious patch of magnetic weakness stretches from South America to Africa and has baffled scientists for decades.

It’s thought the SAA gradually expanded for 200 years, and has lost 10 per cent of its strength compared to the rest of Earth’s magnetic field.

That could pose a problem for humanity, as the field is our primary protection against harmful particles fired from the Sun.

It’s feared that creatures within the SAA area are more vulnerable to solar radiation, leaving them exposed to potentially lethal doses.

Heat map of the South Atlantic Anomaly, which stretches between Africa and South America[/caption]

“Earth’s magnetic field acts like a protective shield around the planet, repelling and trapping charged particles from the Sun,” Nasa wrote in a blog post on Monday.

“But over South America and the southern Atlantic Ocean, an unusually weak spot in the field allows these particles to dip closer to the surface than normal.

“Particle radiation in this region can knock out onboard computers and interfere with the data collection of satellites that pass through it – a key reason why Nasa scientists want to track and study the anomaly.”

On top of this, the area has grown and moved westward at around 12 miles (20km) per year.

A second centre of reduced intensity has also appeared in the last five years, just southwest of Africa.

The fear is that the SAA may split into two separate parts that grow over time.

“The new, eastern minimum of the South Atlantic Anomaly has appeared over the last decade and in recent years is developing vigorously,” said Jürgen Matzka, from the German Research Centre for Geosciences.

“We are very lucky to have the Swarm satellites in orbit to investigate the development of the South Atlantic Anomaly.

“The challenge now is to understand the processes in Earth’s core driving these changes.”

Scientists believe the anomaly is caused by a blip in the processes inside the Earth where the magnetic field originates.

The region threatens to have a significant impact on satellites and other spacecraft orbiting our planet.

It’s a bit like a Bermuda Triangle for space, causing some equipment to go a little skew-whiff as it’s bombarded by solar rays.

Space probes shut down essential components when entering the magnetic field to avoid any damage.

The International Space Station has a handful of its powerboards reset about once a month while passing through the region.

The event “causes a couple of hours of lost data, but it only happens every month or so”, Nasa’s Bryan Blair said.

Some scientists fear that the Earth’s weakening magnetic field could mean Earth is heading for a pole reversal.

That would mean the north and south magnetic poles would switch places.

This has happened fairly regularly throughout Earth’s history, approximately once every 250,000 years.

We’re currently “overdue”, because the last flip was around 780,000 years ago. There’s no evidence that this will happen soon, as fluctuations are common.

In other news, Nasa has published mind-blowing photos of the surface of Mars.

The US military is developing a secretive network of spy satellites that will one day blanket Earth’s orbit.

And Brits took stunning snaps of Elon Musk’s Starlink satellites passing over the UK in April.

Are you worried about the South Atlantic Anomaly? Let us know in the comments! 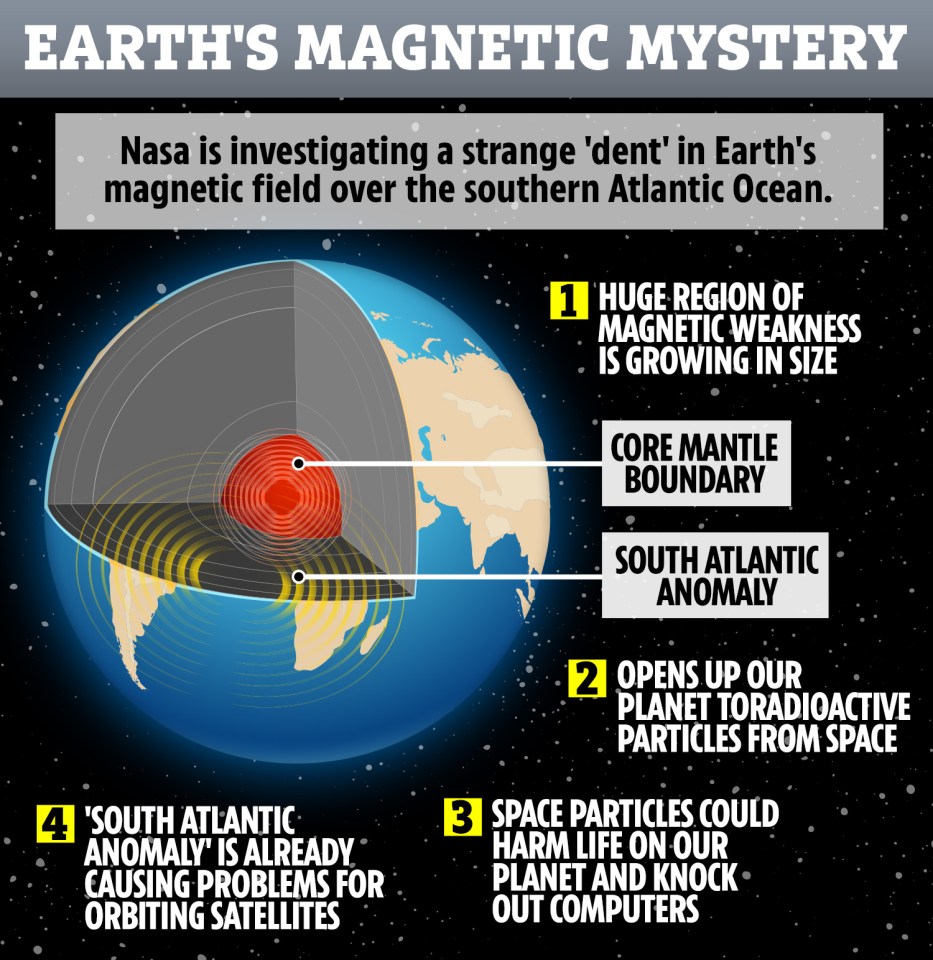 US states seek BILLIONS from drug...