A BISHOP buried with a foetus between his legs almost 350 years ago has baffled archaeologists since they made the discovery in 2012.

A new study claims to finally provide some answers to why Bishop of Lund Peder Pedersen Winstrup had stillborn remains placed behind and between his calves.

Winstrup was bishop of the Churches of Sweden and Denmark in the 17th century.

He was mummified after his death at the age of 74 in 1679 and buried in a family vault in Sweden’s Lund Cathedral.

Archaeologists were given the chance to study his remains in 2012 and were shocked to find a five or six month old foetus buried between the bishop’s legs.

The remains of the baby were seemingly hidden behind the legs and in the lining of the coffin as if someone didn’t want others to notice.

This type of burial isn’t unusual in terms of archaeology if it’s associated with female remains and there are other examples at Lund Cathedral.

However, the decision to place a foetus with the bishop baffled experts.

Archaeologist Torbjörn Ahlström, who worked on the new investigation, said: “It was not uncommon for small children to be placed in coffins with adults.

“The foetus may have been placed in the coffin after the funeral, when it was in a vaulted tomb in Lund Cathedral and therefore accessible.

“Placing a coffin in a vault is one thing, but placing the fetus in the bishop’s coffin is quite another.

“It made us wonder if there was any relationship between the child and the bishop.”

The foetus was hidden and went unnoticed for centuries[/caption]

DNA samples were taken from both the feotus and the bishop and a 25% match was found.

The research team then concluded that the foetus was likely the grandson of the bishop.

The two corpses share a Y chromosome that can only be passed down from a father.

This led the experts to believe the stillborn baby was the son of Winstrup’s son.

We know that the bishop had one son from his first marriage who survived into adulthood.

His name was Peder Pedersen Winstrup.

Historical records suggest he married a wealthy woman called Dorothea Sparre but they lost all their money when the Swedish crown reclaimed land given to the elite.

The young Winstrup is not known to have had any children and the bloodline stopped with him.

The foetus may have been put in his father’s coffin as a symbolic gesture.

The researchers explained in their paper: “With the results from the [ancient DNA] analysis at hand and the genealogy, the only person able to provide a second-degree relative to Peder Winstrup through paternal lineage was his son, Peder.

“The foetus of a boy placed in the coffin could thus be the grandson of the bishop.

“It seems probable that the relatives would have had access to the crypt where the coffins of the Winstrup’s were stored and, thus, a possibility to deposit the foetus in one of the coffins, in this case that of Peder Winstrup.”

The full research paper has been published in the Journal of Archaeological Science: Reports.

In other news, an unearthed stone slab dating back to the Bronze Age may represent Europe’s oldest map.

Human skulls were transformed into pots and drinking cups as recently as 4,000 years ago by Bronze Age Brits.

And, the graves of 50 slaves who were forced to build an elite Roman villa in the UK have been unearthed.

What do you make of the foetus mystery? Let us know in the comments… 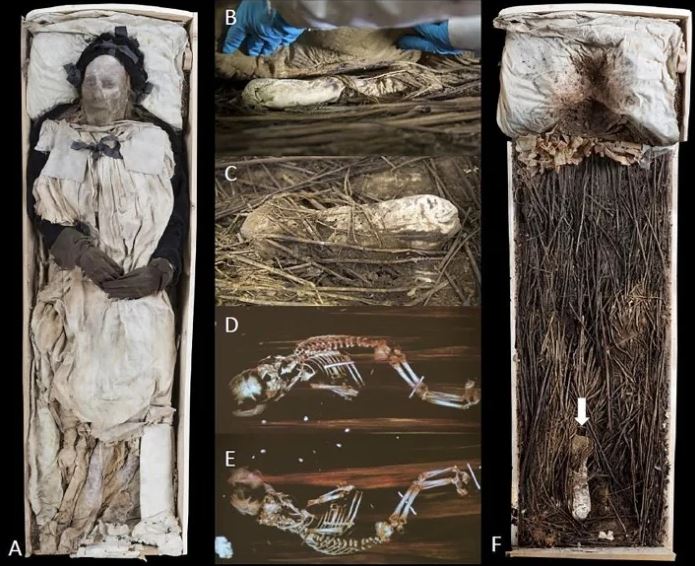