Close
Trending News
HomeTechMost Googled things by US states over past 10 years – including Kim Kardashian, Baby Shark and Fortnite

Most Googled things by US states over past 10 years – including Kim Kardashian, Baby Shark and Fortnite

Most Googled things by US states over past 10 years – including Kim Kardashian, Baby Shark and Fortnite

YOU may not remember what you searched Google for back in 2010 but a new animated map could jog your memory.

V1 Analytics has put together an eye opening YouTube video that shows what each US state has been searching for over the past decade.

The last decade started off with over 20 of the 50 US states searching for Selena Gomez.

By the end of January though the singer was competing with searches for ‘McDonald’s nutrition’.

Searches for Kim Kardashian became popular in Louisiana but this paled in comparison to the amount of searches for Katy Perry by the end of the year.

By January 2011, most US states were either searching for Adele or the Womble dance.

She was soon overtaken with searchers for Lady Gaga’s ‘Born this Way’.

By March and April searches for Rebecca Black exploded after a video she featured in went viral.

Osama Bin Laden’s death in May 2011 also took over searches.

Adele remained a very popular search throughout the year.

The start of January 2012 saw almost all the US states searching for “Kindle Fire”, while four others searched for “Pinterest”.

This was soon overtaken by searches for “Abortion”, a search that remained popular throughout the year.

Abortion was being discussed a lot in the US at the time because 2012 saw numerous restrictions on access to abortion services for some states.

The film Fifty Shades Darker was a top search by June.

By the end of the year “Vine” was a top search along with “Royals”.

By November searches for the Samsung s5 were very popular, with a few people searching for Meghan Trainor and Sam Smith.

This year started off with a boom in searches for singer Meghan Trainor.

Then came searches for Donald Trump and “Pepe the Frog”, which still remains a popular meme.

Zika Virus, Ted Cruz and Beyonce were all top searches at the start of 2016.

Then “Damn Daniel” became a trend.

This was the year of the song Despacito.

This year started with mass searches for Fortnite and Logan Paul.

Fortnite was still popular by the end of the year as well as viral song Baby Shark.

Searches for R Kelly, Ariana Grande’s song 7 Rings and Billie Eilish were all top at the start of 2019.

Game of Throne also took over due to the finale.

By the end of the year Mandalorian and Baby Yoda had taken over.

It probably comes as no surprise that “Coronavirus” has been a top search in almost all states this year.

You can see the full video below.

How to view what Google knows about you

You can take the following steps…

In other news, a major Gmail redesign is aiming to make your working life a lot easier.

Google, Reddit, LinkedIn and TikTok have been caught spying on your iPhone.

What’s your most common Google search? Let us know in the comments… 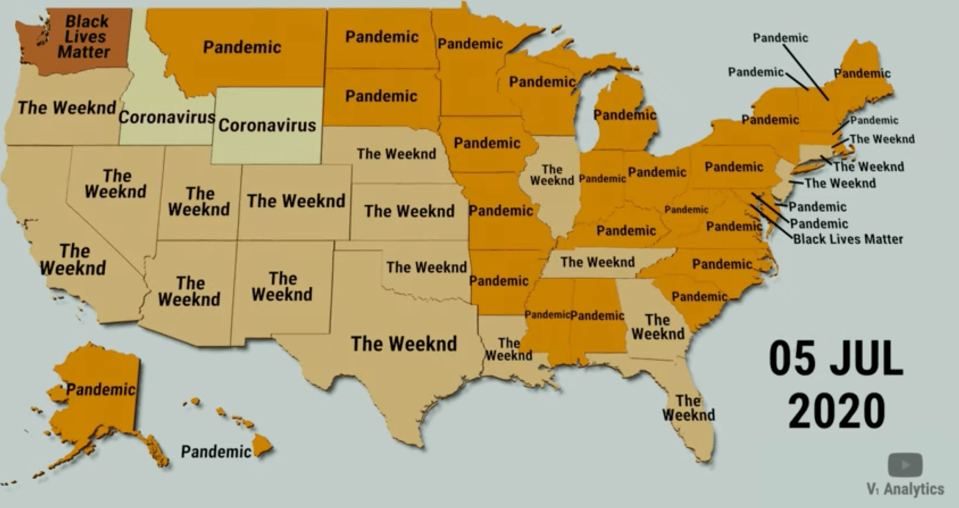