A HUGE dust cloud has travelled from Africa across the entire Atlantic Ocean and the stunning event has been revealed in a video.

Satellites observed the dust plume as it developed and it’s so big it’s been given the nickname Godzilla.

Dust plumes are a natural phenomenon and they occur every year as part of Earth’s nutrient cycle.

Most plumes aren’t as big as ‘Godzilla’ and usually just sink into the sea.

The European Space Agency’s Copernicus Sentinel and Aeolus satellites tracked what could be the world’s largest dust cloud as it headed for the US.

The right conditions can see the mass of dust particles transported into the Earth’s upper troposphere.

This height can help a dust plume travel around 5,000 miles to the US or Caribbean.

The ESA shared an animation of the event to YouTube.

It explained: “The Copernicus Sentinel-5P mission is dedicated to monitoring air pollution by measuring a multitude of trace gases as well as aerosols.

“This animation shows the spread of aerosols from the Saharan dust plume moving westward across the Atlantic Ocean from 1 June to 26 June 2020.

“This plume has reached the Caribbean, South America and the United States.”

It’s fairly common for dust plumes to reach the US but this one is particularly large.

It’s thought to be around 70% larger than average.

It may seem a bit scary but the giant dust plume could be good news.

According to the NOAA, plumes like this can potentially stop hurricanes from forming.

The dust is also nutritious for phytoplankton, tiny creatures that float on top of the ocean.

These creatures create oxygen and feed other marine animals.

Dust plumes can also bring much needed nutrients as far as the Amazon rainforest.

They are also known to make sunsets particularly stunning.

However, the plumes can be a health risk for some people with underlying health conditions and do trigger air quality warnings.

In other news, swarms of locusts are plaguing East Africa as the country continues to battle the global pandemic.

A beaver invasion in the Arctic is melting ice and ‘making global warming worse’.

And, an epic lightning flash over Brazil has just been labelled as the single longest lightning bolt ever recorded.

What do you make of the huge dust cloud? Let us know in the comments… 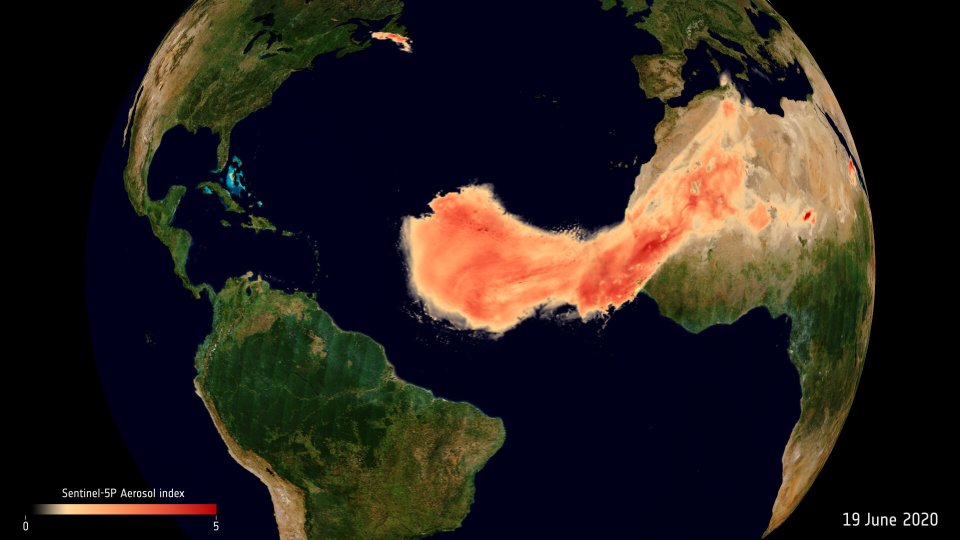 'Already got invited to the b...