NASA has revealed a stunning simulation of what sunsets would look like on different planets and one of Saturn’s moons.

Planetary scientist Geronimo Villanueva from Nasa’s Goddard Space Flight Center is the genius behind the creation.

Nasa wrote in the video description: “Geronimo Villanueva, a NASA planetary scientist, created these sunset simulations while building a computer modeling tool for a possible future mission to Uranus, an icy-cold planet in the outer solar system.

“To check the accuracy of his tool, Villanueva simulated known sky colors of various planets and moons, some of which are shown in this video.

“The simulations show these worlds turning away from the light of the Sun, which is what’s happening when we see a sunset.

“As these worlds rotate, photons get scattered in different directions depending on the energy of the photons and the types of molecules in the atmospheres.

Three types of sunset on Earth feature in the comparison[/caption]

“The result is a lovely palette of colors that would be visible to those standing on these worlds.”

One showing what the sunsets look like if you were looking at the planets and moons while floating in space.

The other shows what it would be like if you stood on the surface.

Earth was given three simulations to show the difference between clear, hazy and overcast sunsets.

The Mars simulation showed how a sunset would change the sky from brown to blue due to how the dust particles scatter on the planet.

TRAPPIST-1e, an Earth size planet outside our Solar System, was also included in the study.

As was Saturn’s largest moon, Titan.

Villaneuva relied on a tool called the Planetary Spectrum Generator for the project.

It can show you evening sky simulations on a variety of planets.

The Sun – all the facts you need to know

What is it, why does it exist, and why is it so ruddy hot all the time?

Which was your favourite sunset? Let us know in the comments… 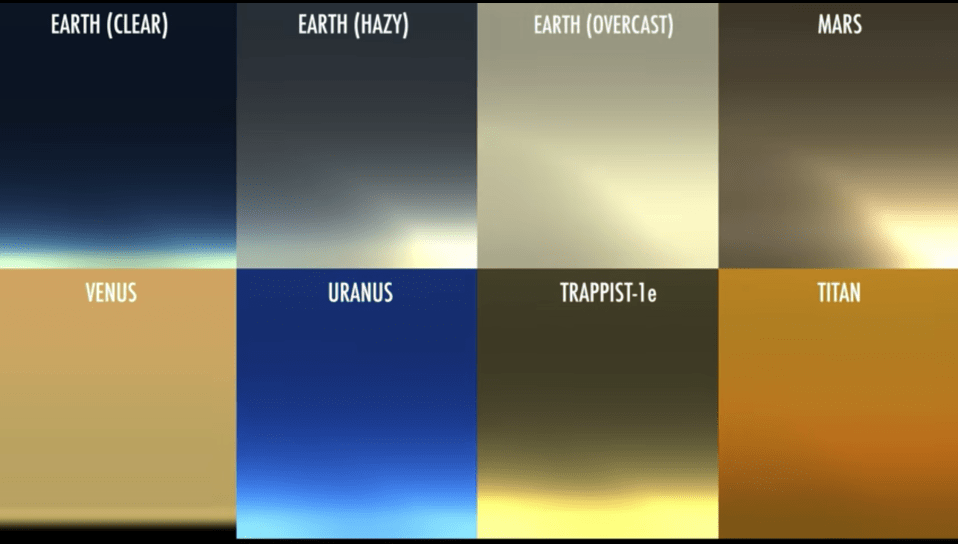