NASA has released a hypnotic time-lapse video of the Sun.

It shows activity on the fiery star over the past 10 years and is pretty mesmerising.

The time-lapse is actually made up of a whopping 425 million photographs.

These were taken by the Solar Dynamics Observatory (SDO), a Nasa probe that launched in 2010.

Since its launch, the probe has used high resolution imaging to document the Sun on a daily basis.

Scientists now have over 20 million gigabytes of data to analyse from the probe.

Some of this data has been used to create the 60-minute time-lapse.

Nasa said: “With a triad of instruments, SDO captures an image of the Sun every 0.75 seconds.

“This 10-year time lapse showcases photos taken at a wavelength of 17.1 nanometers, which is an extreme ultraviolet wavelength that shows the Sun’s outermost atmospheric layer – the corona.

“Compiling one photo every hour, the movie condenses a decade of the Sun into 61 minutes.

“The video shows the rise and fall in activity that occurs as part of the Sun’s 11-year solar cycle and notable events, like transiting planets and eruptions.”

Nasa has admitted that, although the SDO has remained focused on the Sun, it did miss a few moments over the past decade.

These show up as dark frames in the video.

There’s also parts of the time-lapse which show the Sun slightly off centre.

This was due to the probe adjusting its instruments.

The space agency explained: “While SDO has kept an unblinking eye pointed toward the Sun, there have been a few moments it missed.

“The dark frames in the video are caused by Earth or the Moon eclipsing SDO as they pass between the spacecraft and the Sun.

“A longer blackout in 2016 was caused by a temporary issue with the AIA instrument that was successfully resolved after a week.”

Nasa will continue to watch the Sun for years to come.

The Sun – all the facts you need to know

What is it, why does it exist, and why is it so ruddy hot all the time?

In other space news, Nasa astronauts will be fixing a battery on an ISS spacewalk today.

What do you make of this time-lapse? Let us know in the comments… 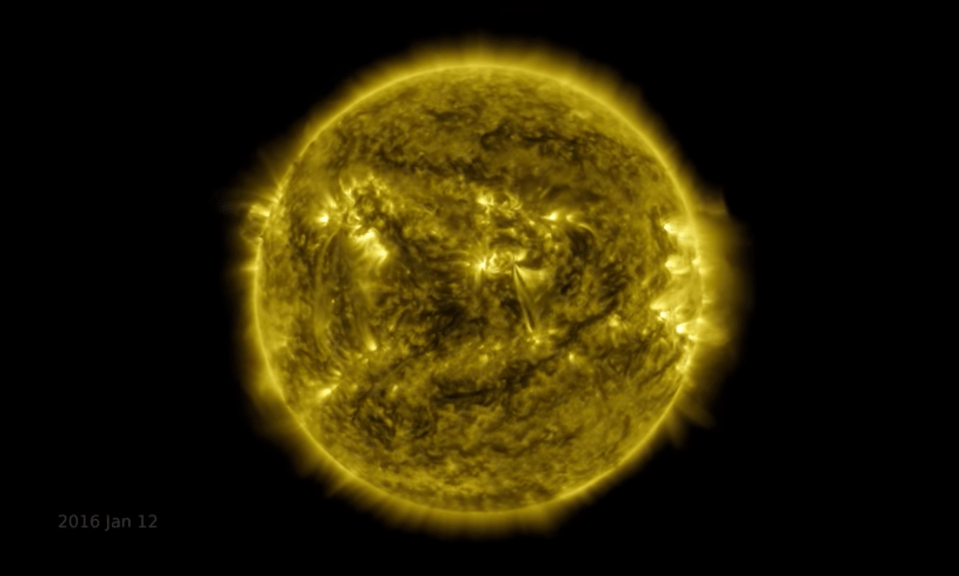