YOU can now get Microsoft Word to do the typing for you with its new Transcribe in Word feature.

It’s free for Microsoft 365 subscribers and will be very useful for students, reporters and anyone else who has a lot of audio they need to type up.

The new tool relies on AI[/caption]

Transcribe in Word will now appear in the online version of Word for Microsoft 365 subscribers.

You can upload the audio that you’d like to be transcribed or click to record yourself speaking live and then have that sound typed up.

The feature uses artificial intelligence to listen out for different speakers and breaks in the conversation.

It then separates out the transcribed audio into editable chunks.

You can upload audio or record your own[/caption]

You can play each section back and insert it into the word document when you’re happy that it’s correct.

The feature can also support audio from videos.

Transcription times can vary but if you record yourself in Word reports suggest it only takes seconds to transcribe.

Transcribe in Word can capture audio you’re playing on your PC, like a YouTube video, or audio from the people around you via your microphone.

There are plans to bring the feature to Word for iOS and Android apps before the end of 2020.

Unfortunately, US English is the only supported language for now.

Microsoft 365 subscribers will also have a cap of five hours per month put on audio that they can upload.

Directly recorded audio for transcription has no limit.

Each audio upload has a maximum capacity of 200MB.

There’s no word on whether the feature will be coming to desktop Word for Windows or macOS.

How to use Transcribe in Word

Here’s what you need to do…

First, you’ll need to be a Microsoft 365 subscribers and using the online version of Word.

Once in Word, click “Home” and then click the “Dictate” icon on the upper right hand side of the screen.

Click “Transcribe” and then select whether you want to upload audio or record it.

Once uploaded or recorded you’ll be given the option to “Save and transcribe now”.

Your audio should then be transcribed for you and separated into sections that you can check over and add to your Word document.

In other news, Facebook is introducing a new shopping tab to its main app.

Instagram now has a “Suggested Posts” feature that could keep you on your feed for longer.

What are your thoughts on the new Microsoft Word feature? Let us know in the comments… 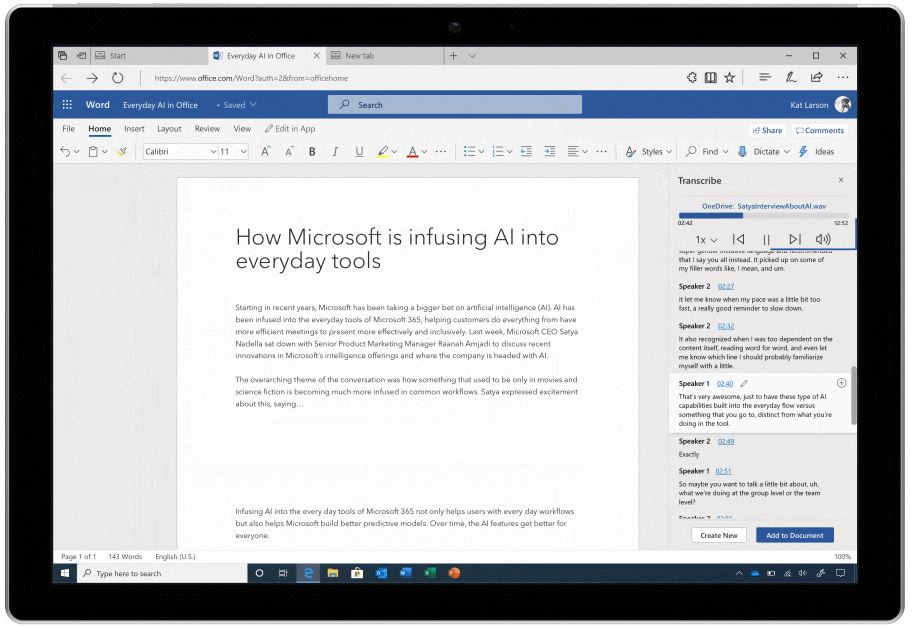