MARS is about to reach the closest point it will be to Earth for the next 15 years.

The Red Planet will be 62.1 million kilometres (38.6 million miles) away from us and you should be able to spot it with the naked eye. 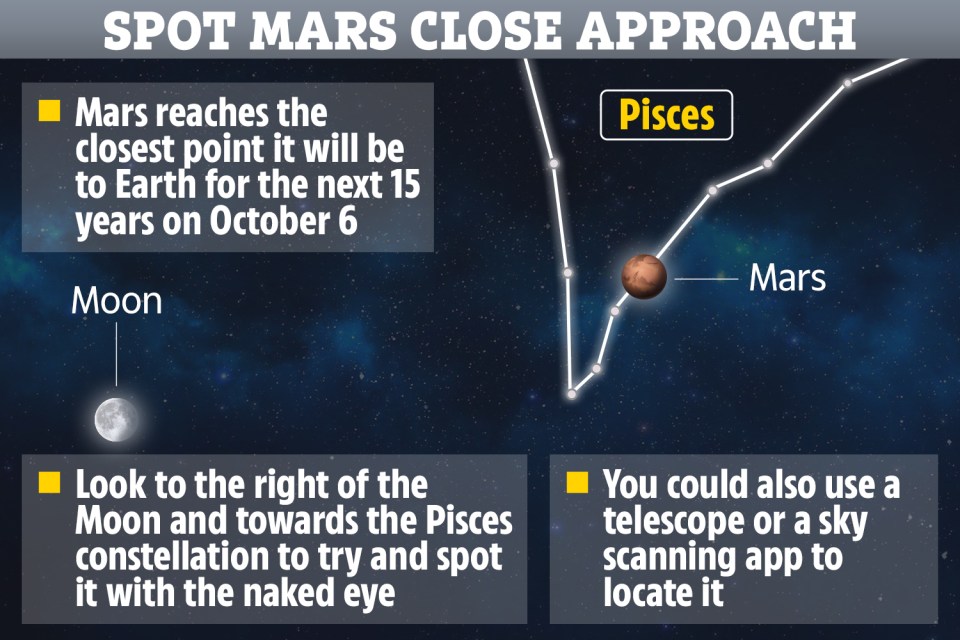 This may still seem like a large distance but it will make Mars bright and easy for stargazers to spot.

At its furthest way, Mars reaches a distance of 401 million kilometres (250 miles) from Earth.

Mars should be visible with the naked eye but you could also use a telescope.

The planet will be at its absolute closest on October 6.

Look to the right of the Moon and towards the Pisces constellation to try and spot it.

The best time to do this will be very late in the evening or just after midnight.

Downloading a sky scanning app on your smartphone could help you find the planet easily.

Mars occasionally comes closer to Earth because our planet and Mars have orbits that aren’t exactly perfect circles.

This means that sometimes they come closer to each other as they journey around the Sun.

Scientists think the closest Mars can get to Earth is 54.6 million kilometres (33.9 million miles).

That closest point has never actually been recorded though.

After our alignment this week, our next close encounter won’t be until 2035.

Nasa explained: “Close Approach is when Mars and Earth come nearest to each other in their orbits around the sun. Close is a relative term.

“The minimum distance from Earth to Mars is about 33.9 million miles (54.6 million kilometers). However, that doesn’t happen very often.

“If Earth and Mars had perfectly circular orbits, their minimum distance would always be the same. However, they have elliptical (egg-shaped) paths.”

The space agency added: “The orbits of Mars and Earth are also slightly tilted with respect to each other.

“All of these factors mean that not all close encounters are equal. In 2003, Mars made its closest approach to Earth in nearly 60,000 years! It won’t be that close again until the year 2287.

“When Mars and Earth are close to each other, Mars appears very bright in our sky. It also makes it easier to see with telescopes or the naked eye. The Red Planet comes close enough for exceptional viewing only once or twice every 15 or 17 years.”

Would you ever want to live on Mars? Let us know in the comments…

How to hide your iPhone apps and h...