The letter was written decades before scientists found out creatures like birds, dogs and bees can ‘see’ Earth’s magnetic field.

The scientist wrote the letter in 1949 as a response to a query from engineer Glyn Davys about animal perception.

He wrote: “It is thinkable that the investigation of the behaviour of migratory birds and carrier pigeons may someday lead to the understanding of some physical process which is not yet known.”

It’s 72 years later and we now have evidence that some birds can rely on ‘super-senses’ in their eyes to detect Earth magnetic field.

They can then use the magnetic field as a guide, which is useful for migration.

Dogs are also thought to be able to sense our planet’s magnetic field with receptors in their eyes.

Bees, on the other hand, are said to have magnetic field receptors in their abdomens.

Einstein’s predictive letter was recently donated to The Hebrew University of Jerusalem.

Researchers there wrote: “It is amazing that [Einstein] conceived this possibility, decades before empirical evidence revealed that several animals can indeed perceive magnetic fields and use such information for navigation.”

At the time of writing, bat echolocation had been discovered and Einstein might have been taking this into consideration to make his prediction.

Einstein was a physicist but was also interested in how the biological sciences and physics connect.

He was fascinated by bee behaviour, so likely enjoyed responding to Davys about a similar interest.

Bee navigation is also mentioned in the typed out note.

How bees perceive the world has actually helped modern day scientists improve technology like the cameras on our phones.

Scientists may have built on Einstein’s theories over the past 70 years but there’s still a long way to go to truly understand animal senses that we don’t have.

A study about the letter has been published in the Journal of Comparative Physiology A.

Here’s what you need to know about the famous genius…


Bonkers ‘Atomik’ booze made from Chernobyl apples seized by Ukraine


Nasa probe hurtling back to Earth with rocks from ‘doomsday’ asteroid

In other news, Ukranian spies have seized of a batch of booze made near the blitzed Chernobyl power plant and destined for Britain.

Elon Musk’s plot to colonise other worlds may have been predicted by a German scientist 70 years ago.

And, genetically modified mosquitoes have been released for the first time ever in the US.

What are your thoughts on Einstein’s letter? Let us know in the comments… 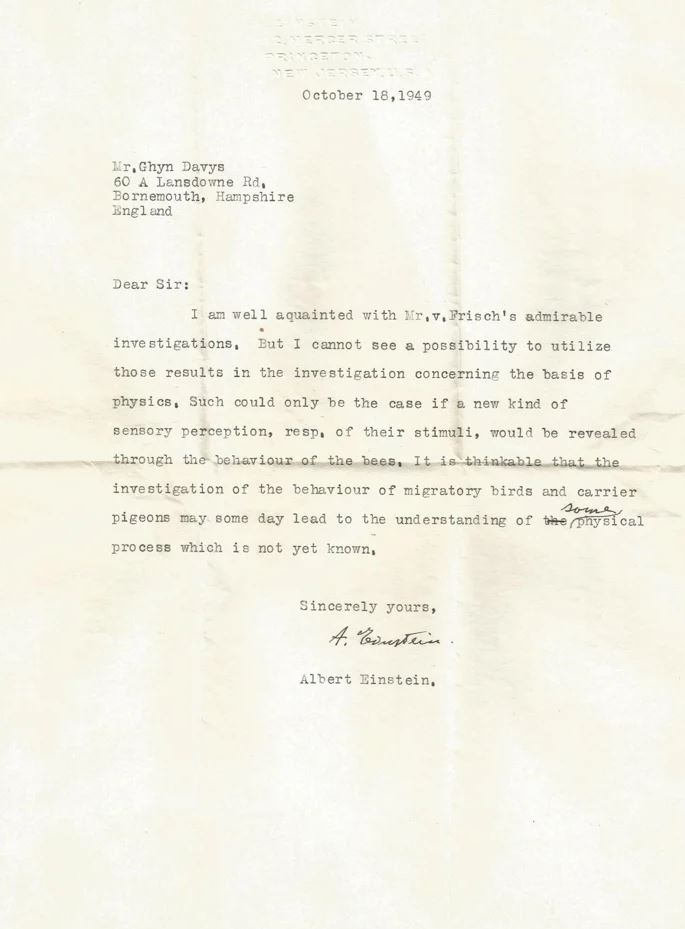 Volkswagen has GROWN a billboard t...