It’s being referred to as the ‘South Pole Wall’ and has been picked up on stunning 3D maps of the universe.

The discovery is said to be one of the biggest cosmic structures ever.

For some perspective, one light-year is roughly six trillion miles so 1.4 billion light years is a struggle to even comprehend.

The Milky Way is around 100,000 lights years wide and it’s thought to take under two light years to reach the furthest point in our Solar System.

The South Pole Wall is said to be a huge wall of hundreds of thousands of galaxies below Earth’s South Pole.

What’s unusual about the discovery is that such a structure could remain undetected until now.

This is largely because parts of it sit half a billion light-years away from the Milky Way galaxy.

The galaxies in the South Pole Wall are said to be in a cosmic web.

According to Live Science, cosmic web’s string galaxies together like pearl necklaces via huge strands of hydrogen gas.

Cosmographers, people who specialise in mapping these things, used new tech to look into a zone called the Zone of Galactic Obscuration.

This is a dark spot in the southern region of the sky because the bright light of the Milky Way obscures the view of what’s behind.

Dark matter makes up most of the matter in the universe but is invisible and is detected by its gravitational pull.

The researchers were able to create a mind-blowing map of a large section of material in the southernmost point of the sky that has previously gone unnoticed.

Discovering structures like this can add to our understanding of the universe.

However, the scientists admit that they may not have even discovered the extent of the South Pole Wall.

They wrote: “We will not be certain of its full extent, nor whether it is unusual, until we map the universe on a significantly grander scale.”

These findings have been published in The Astrophysical Journal.

In other space news, Jupiter is about to reach opposition, meaning stargazers can see the planet at its brightest this weekend.

What do you make of this mysterious structure? Let us know in the comments… 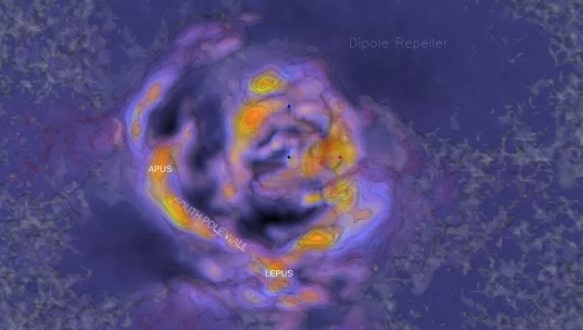 Not so fast: US sprinter thinks he...