A DEADLY drone that can fly inside buildings and take out enemies with a mounted shotgun has been developed by the UK military. 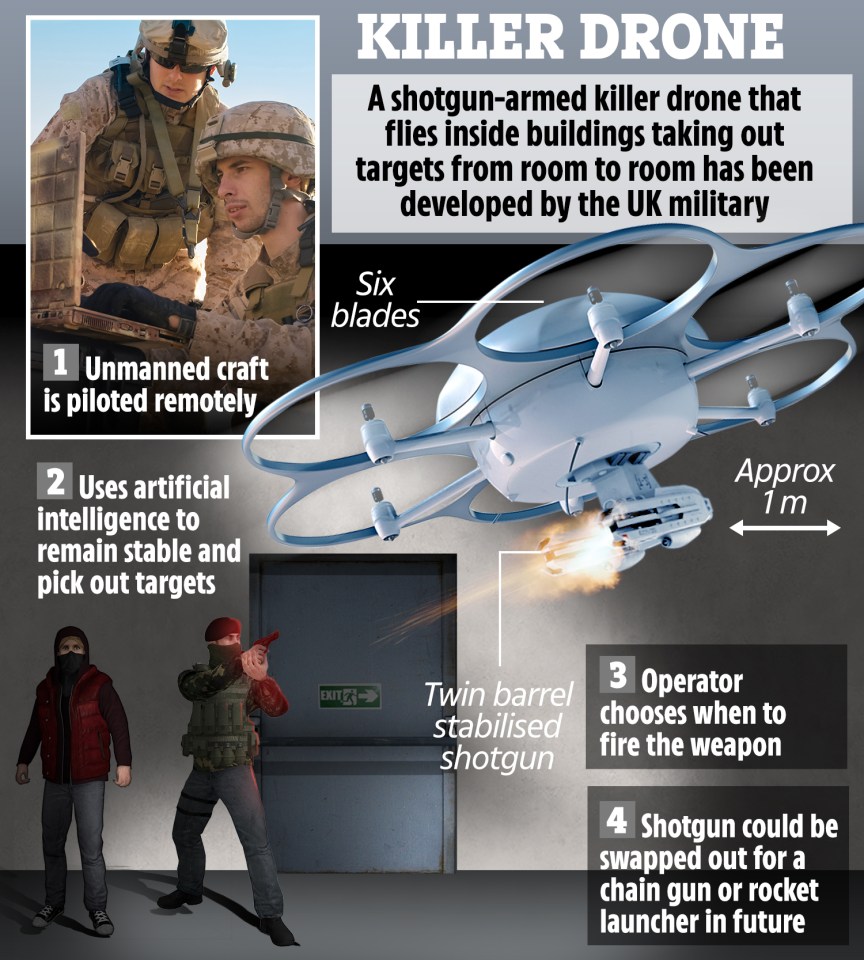 Engineers were able to build the unmanned weapon, called the i9, after overcoming the “wall suck” problem facing drones flying indoors.

This causes drones carrying heavy payloads to crash because of the air they displace in small rooms, The Times reports.

The Ministry of Defence developed the fighter with an undisclosed company specifically for use in urban settings.

That could include a building filled with armed personnel. Operated remotely, the drone would fly in and take out foes before soldiers infiltrate.

The current design is fitted with a twin barrel stabilised shotgun, although the craft could get a rocket or chain gun upgrade in future.

“Project i9 has successfully created a prototype capability, which is being used for experimentation with end users now.

“This type of UAS will reduce the threat to life of personnel by giving tactical commanders the option to send a remotely-controlled machine into dangerous scenarios rather than put personnel or military working dogs at significant risk.”

It’s hoped the technology will make the ‘breach’ part of urban missions, in which soldiers enter a building or compound, safer[/caption]

The i9 is just a prototype for now, and the MoD hasn’t provided any clues over when a full version will be ready for deployment.

The drone uses a camera powered by “machine vision” – which works like the software in self-driving cars – to identify targets and objects.

A mixture of AI and physics helps keep the weapon upright and stable in the air.

A solider operates the i9 remotely by watching its camera feed through a screen.

The operator chooses when to fire the shotgun after the drone has picked out targets. The craft cannot discharge its weapon using AI alone.

It’s hoped the technology will make the “breach” part of urban missions, in which soldiers enter a building or compound, safer.

Significant casualties were suffered by the army in Afghanistan as troops entered buildings blockaded by armed combatants, according to The Times.

MoD told MailOnline they were not able to share a photo of the device because it was developed by a startup company in stealth mode.

That means it’s in negotiations about Series A funding and so does not have a public profile.

The i9 won’t be the UK military’s only bit of killer drone tech.

Dubbed the T-400, the unmanned craft can carry heavy loads up to 12 miles and has been described as the “pick-up truck of the air”.

Britain’s armed forces are being reshaped to be “fit for tomorrow’s battles, not fighting yesterday’s”, Mr Wallace said.


Bad iPhone battery life after update? Apple reveals how to fix it in minutes

In other news, the UK military is developing drones that drop torpedoes and airlift wounded troops, according to Defence Secretary Ben Wallace.

Russia recently showed off its “ground force” of killer robots in an unsettling video.

And here’s how the Ancient Greeks predicted killer robots, driverless cars and even Amazon Alexa speakers.

What do you think of the UK’s shotgun drone programme? Let us know in the comments!