Close
Trending News
HomeTechJupiter-sized horror planet with 3,200C climate that vaporises metal is ‘one of most extreme ever found’

Jupiter-sized horror planet with 3,200C climate that vaporises metal is ‘one of most extreme ever found’

Jupiter-sized horror planet with 3,200C climate that vaporises metal is ‘one of most extreme ever found’

ASTRONOMERS have revealed details about one of the most extreme planets ever discovered.

Planet WASP-189b has surface temperatures of 3,200 degrees Celsius (5,792 degrees Fahrenheit), meaning it could vaporise you. 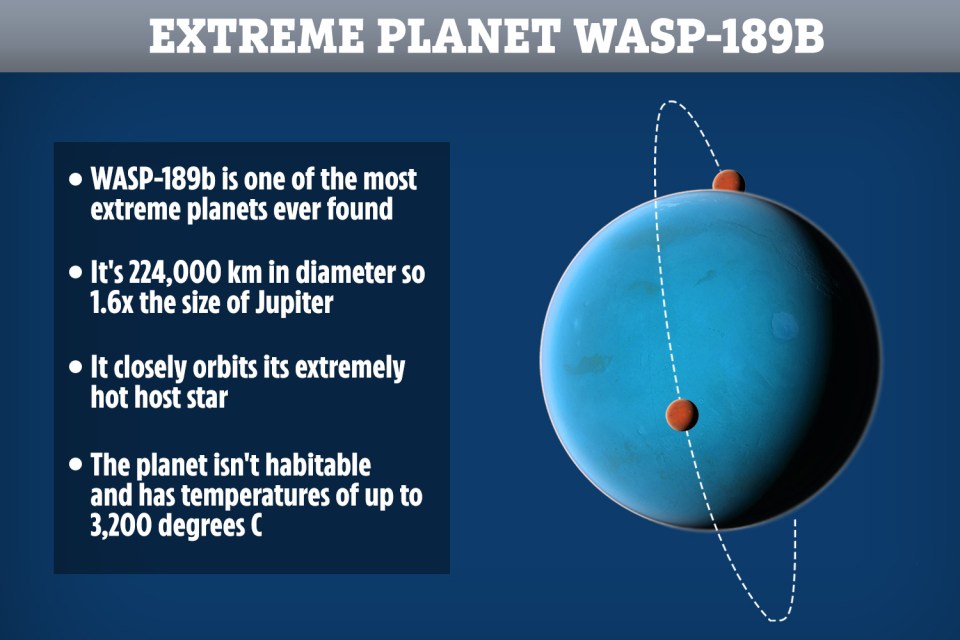 Researchers at the European Space Agency measured those extreme temperatures with the CHaracterising ExOPlanet Satellite (CHEOPS).

WASP-189b isn’t as hot as the Sun but it could still turn metals and rocks to gas in seconds.

It’s not in our Solar System so it’s known as an exoplanet.

The scary planet orbits its star every 2.7 days.

The planet is also huge, measuring 1.6 times the size of Jupiter.

Astrophysicist Monika Lendl from the University of Geneva said: “WASP-189b is especially interesting because it is a gas giant that orbits very close to its host star.

“It takes less than three days for it to circle its star, and it is 20 times closer to it than Earth is to the Sun.”

It’s about 1.6x the size of Jupiter[/caption]

That makes it one of the hottest stars known to have planets orbiting it.

WASP-189b is 326 light-years away from Earth, which is too far away to observe directly.

However, CHEOPS was able to observe and learn more about its makeup by watching it transit its star.

Lendl said: “Only a handful of planets are known to exist around stars this hot, and this system is by far the brightest.

“WASP-189b is also the brightest hot Jupiter that we can observe as it passes in front of or behind its star, making the whole system really intriguing.”

The researchers now want to find out how the planet formed in the first place.

This study has been published  in Astronomy & Astrophysics.

In other news, Nasa admitted a mysterious air leak that has plagued the International Space Station for months is getting worse.

The space agency finally set a date for its first proper crewed flight from US soil aboard a SpaceX rocket.

What do you think of the scary sounding exoplanet? Let us know in the comments…