Jupiter, Saturn and Mercury conjunction – how to watch tonight

Jupiter, Saturn and Mercury conjunction – how to watch tonight

IT’S your last chance to see Mercury close to Jupiter and Saturn in the sky tonight as the three planets form a rare conjunction.

Stargazers should be able to spot the celestial event just after sunset this evening. 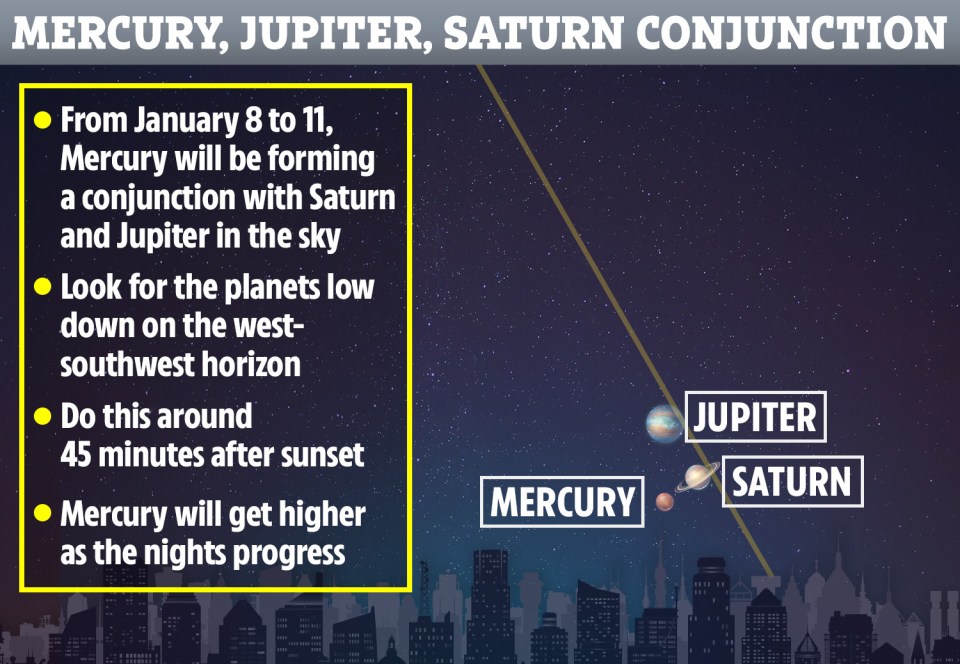 Jupiter and Saturn made their closest approach in December[/caption]

Nasa said: “From Friday evening to Monday evening, the planet Mercury will appear to pass first by Saturn and then by Jupiter as it shifts away from the horizon, visible each evening low in the west-southwest and setting before evening twilight ends.”

That means tonight is the last night you can try and spot the three planets.

You should look towards the Capricorn constellation at twilight.

Night sky scanning apps can be useful to download if you need to be pointed in the right direction of a constellation.

Some of the apps can even point out planets to you.

However, stargazing is best when you’re in a very dark location and looking at your phone screen can affect your ability to adjust your eyes to the dark.

You may need binoculars to see all three planets.

Jupiter will be the brightest so if you spot that first you should find the other two nearby.

Around 45 minutes after sunset is probably the best time to look for the planets low down on the west-southwest horizon.

You’re also better going to somewhere that has an unobstructed horizon view if you can.

Bear in mind that Saturn will stay below the big bright Jupiter for the conjunction and Mercury will be up and to the left of Saturn.

Cloudy skies may ruin your chances of spotting the celestial trio.

The last time this conjunction happened was in October 2015.

In other space news, stunning new images of the largest canyon in our Solar System have been taken by a Nasa probe on Mars.

Will you be stargazing this evening? Let us know in the comments…