FUMING iPhone users are reporting that their batteries are draining at an alarming rate.

Reports on social media suggest the issue is caused by Apple’s Music app and arose following an update rolled out by the California firm this week.

The issue has now been fixed by Apple in a new software update, a spokesperson confirmed in an email to The Sun.

Prior to the update, hundreds of users took to Reddit and Apple’s forums to complain about the Music app.

It allegedly sapped your battery even when not in use, MacRumours reported.

Apparently Apple Music would sometimes run in the background for several hours each day, even if the app had never been used.

One iPhone user wrote on an Apple forum: “I just purchased a new iPhone 11 a few days ago, and my battery is crashing so fast.

“I haven’t even used the Apple Music App yet and it says that it has been running in the background for over 18 hours and has used 95 per cent of my battery.

“My phone is also getting very hot from this. I am concerned this will kill my battery on my new phone.”

Other users reported Apple Music was using upwards of 50 per cent of their battery juice per day.

One person said the app ran in the background for several hours, resulting in 53 per cent battery usage.

They claimed they had never opened the Apple Music app.

The issue is reportedly hitting users with iPhones running iOS 13.5.1, which was rolled out by Apple last month. Apple has now fixed the issue.

It’s not clear what caused the problem, but some users said the iOS update changed the way Apple Music interacted with the firm’s servers.

Why does heat damage batteries?

It’s thought that the app was constantly connecting to the servers while trying to download content in the background.

For those experiencing issues, your best bet to avoid battery drain is to simply update your iPhone.

From here, your phone will tell you if it’s up to date. If not, tap Install to update now.

In other news, your iPhone can now tell you if your password has been hacked.

What do you think of the iPhone update? Let us know in the comments! 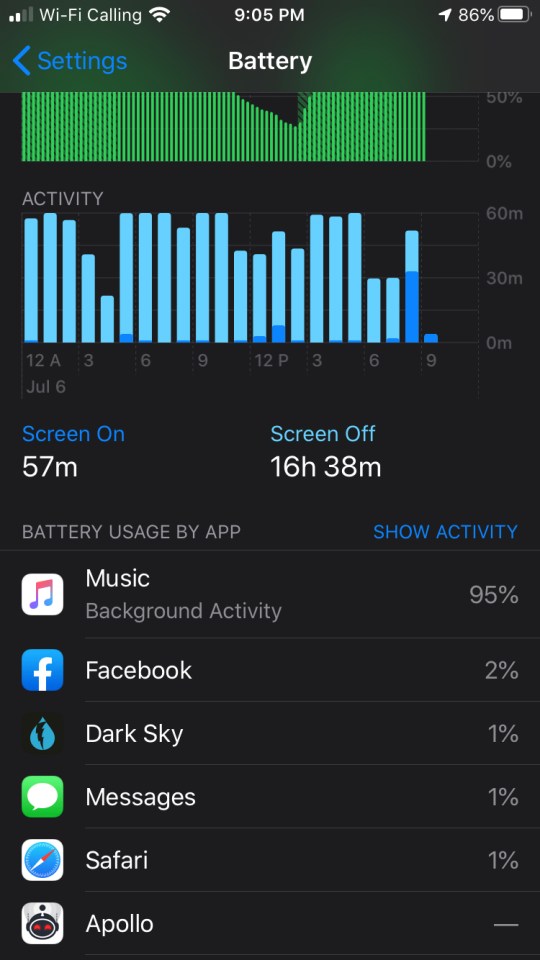