AMAZON is on a mission to sue 50 unknown scammers that are sending out fake messages pretending to be from the tech giant.

The messages claim things like the recipient has won “Amazon pods” and encourages people to click on a link to claim the fake prize.

The message directs the recipient to a link which leads to a webpage that looks scarily official and very similar to Amazon’s real website.

If you receive a similar message, you’re advised to ignore it and not click any links.

The website encourages people to take a survey and buy products they don’t necessarily want or need.

Amazon wants to unmask the scammers[/caption]

According to Amazon’s legal complaint documents, the tech giant is suing for the use of its logos, web design and pointless surveys that try and trick innocent people into buying products.

The start of the lawsuit document states that the scammers are operating “an unlawful advertising scheme that infringes Amazon’s trademarks in order to fraudulently generate internet traffic so as to unlawfully profit from affiliate networks and online advertisers.”

It also mentions “the numerous victims who receive Defendant’s text messages on their mobile phones and visit their websites.”

The scammers seem to make money by referring people to the products the surveys advocate.

Unfortunately, Amazon doesn’t know exactly who the scammers are but is hoping its legal action will help to unmask them.

Right now the lawsuit is simply filed against 50 unknown people.

Amazon filed a similar scam lawsuit in 2018 and ended up unmasking at least four defendants who got permanent injunctions.

The company is said to have won $1.5 million in trying to get justice against scammers.


Instagram wants you to ‘declare your pronouns’ with NEW profile feature


Will you lose WhatsApp texts if you don’t accept terms? What happens on May 15

In other news, Instagram is making it easier for you to publicly display your pronouns on your profile.

And, Facebook is facing backlash in the US over plans to create a version of Instagram for children under 13.

Have you spotted any tech scams recently? Let us know in the comments… 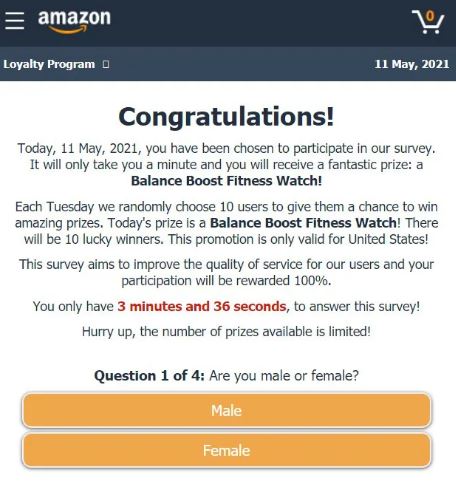 PS5 stock: When will PlayStation 5...

Battlefield 6 release date and is...