ICELAND”S most active volcano may be on the verge of eruption, scientists warn.

Seismic activity at the 5,600ft (1,700m) tall Grímsvötn volcano jumped last week, indicating that a massive eruption might be imminent. 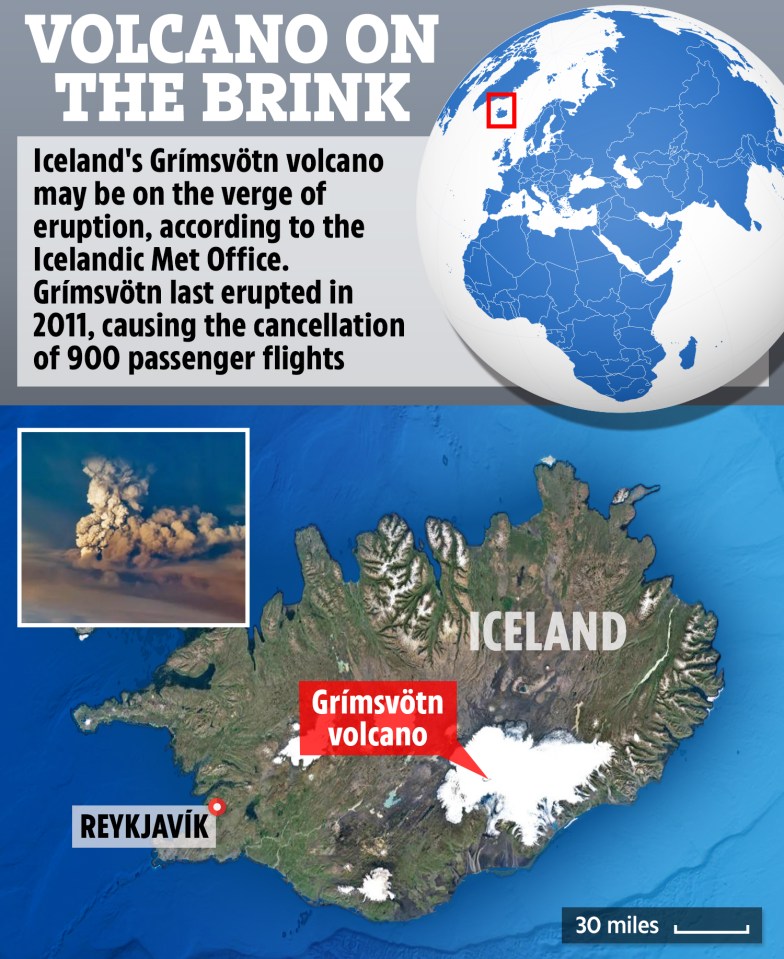 Grímsvötn last erupted in 2011, belching plumes of black smoke 12 miles (20km) high and forcing the cancellation of around 900 passenger flights.

A blast wouldn’t cause quite the same commotion today, with many flights grounded due to travel restrictions sparked by the Covid-19 pandemic.

However, another major eruption could lead to ash particles and other harmful pollutants dispersing over Britain.

In a statement this week, The Icelandic Met Office (IMO) said seismic activity at Grímsvötn volcano had risen during the past month.

Grímsvötn last erupted in 2011, belching plumed of black smoke into the air[/caption]

The Aviation Colour Code for the volcano was raised to yellow from green on October 1, according to Yahoo News.

The raised threat level is a precaution, and does not necessarily mean an eruption is imminent, scientists said.

However, “multiple datasets now indicate that Grímsvötn volcano has reached a level of unrest”, they added.

Grímsvötn is far from any settlements, and if it were to erupt, it’s unlikely anyone would be in immediate danger.

Dr Dave McGarvie, a volcano expert at Lancaster University, warned that an eruption could cause heavy local flooding.

Due to Grímsvötn’s unusual position – buried in thick ice – a blast of heat from the volcano can lead to a dump of vast quantities of meltwater.

“This meltwater can escape suddenly,” Dr McGarvie wrote in The Conversation.

“After travelling southwards beneath the ice for about 45 kilometres it emerges at the ice margin as a flood, which in the past has washed away roads and bridges.”

Scientists warned that an eruption could cause heavy local flooding[/caption]

Grímsvötn is Iceland’s most active volcano, with more than 65 recorded eruptions over the past 800 years.

It erupts every five to ten years on average, according to scientists. The last one was nine years ago.

Should an eruption occur, the main force of the explosion would be absorbed by the ice and meltwater surrounding the volcano.

This means ash will be spewed tens of miles into the air, rather than hundreds, and it will disperse quickly.

How do volcanoes erupt?

That won’t help aviation industry chiefs, however, who could really do without further disruptions to an already torrid year for the travel sector.

The Aviation Colour Code system is an alert system that specifically warns of the potential for huge ash clouds sparked by volcanoes.

It has four levels: Green, yellow, orange and red.

Grímsvötn sits on yellow for now, but could rise further up the scale if more seismic activity is detected.

In other news, an incredible satellite image captured the erupting Krakatoa volcano spewing debris into the air in April.

It recently emerged that prehistoric humans survived a volcanic super-eruption 70,000 years ago that triggered a ten-year winter.

Are you concerned about the Icelandic volcano? Let us know in the comments!