THE LAST meal of a 240million year old sea monster has been revealed by archaeologists.

A dolphin-like ichthyosaur fossil found in a rock shows the creature ripped up another large marine reptile and ate it shortly before dying.

Experts say the fossil is an example of megapredation.

This just means it shows how large creatures were preying on other large animals at the time.

The fossil was actually discovered in 2010 in a quarry in southwestern China but has been the focus of a new study recently published in the journal iScience.

Scientists can’t say for sure if the lizard like creature in the ichthyosaur’s stomach was preyed upon or scavenged after dying of other causes.

The fossil was found in China[/caption]

Either way it is impressive to see a four metre long creature inside the stomach of another five metre monster.

The prey is thought to have been an ancient lizard-like being called Xinpusaurus xingyiensis.

Co-author Ryosuke Motani, a professor of paleobiology at the University of California, Davis said: “If you look across all the similar marine reptiles that lived in the age of dinosaurs, we’ve actually never found something articulated like this in the stomach.

The quarry is still being excavated[/caption]

“Our ichthyosaur’s stomach contents weren’t etched by stomach acid, so it must have died quite soon after ingesting this food item.

“At first, we just didn’t believe it, but after spending several years visiting the dig site and looking at the same specimens, we finally were able to swallow what we were seeing.”

Stomach contents are rarely found in marine fossils so this one is particularly exciting.

Ichthyosaurs have quite blunt teeth so previous research suggested they weren’t major predators.

Motani said: “Now, we can seriously consider that they were eating big animals, even when they had grasping teeth.

“It’s been suggested before that maybe a cutting edge was not crucial, and our discovery really supports that.

Given the size of the Ichthyosaur’s last meal, humans probably wouldn’t stand a chance against the ancient creature if it was still around.

The site were the fossil was found is still be excavated and has been turned into a museum.

In other archaeology news, a major Stonehenge puzzle has finally been solved after scientists located the origin of the monument’s giant rocks.

The earliest art ever created on the British Isles has been discovered – dating as far back as 23,000 years ago.

And, a rare mutated Neanderthal gene could be making some people more sensitive to pain.

What do you think of the sea monster discovery? Let us know in the comments… 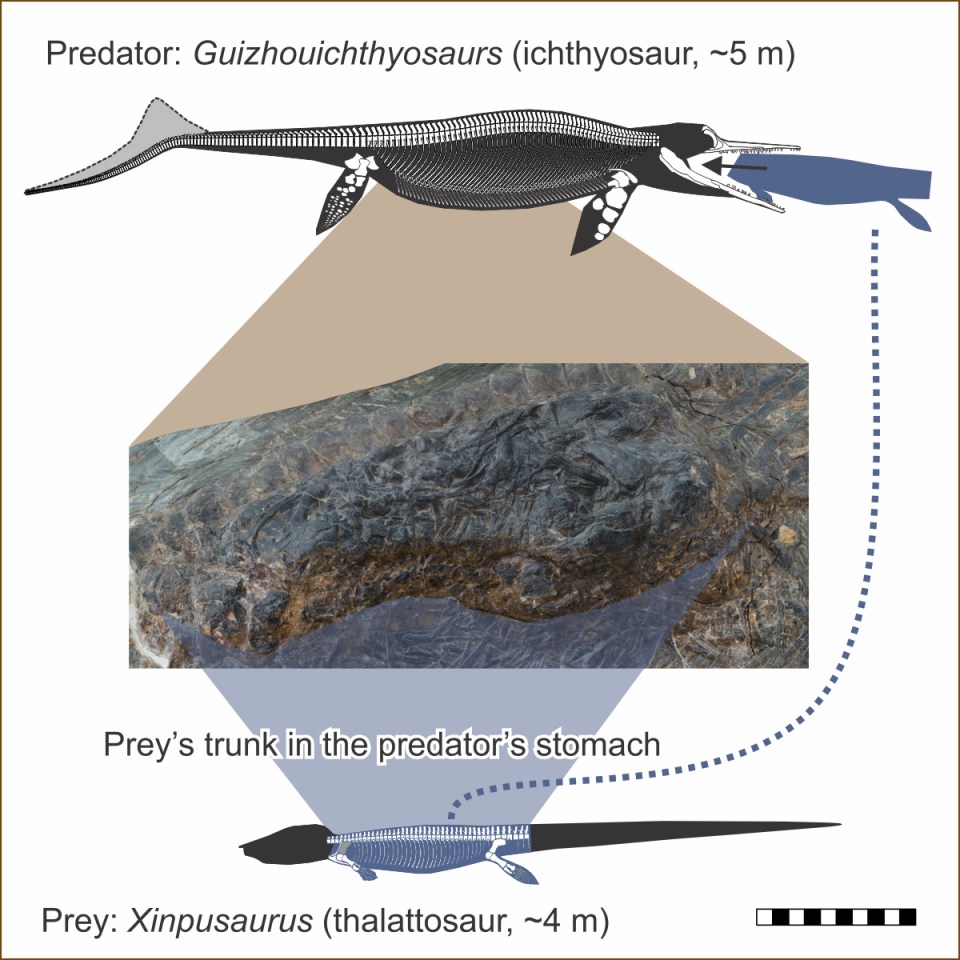