OUR most ancient ancestors were mud-munching creatures that looked like a cross between a frog and a fish.

Named Cephalaspis, it lived roughly 400million years ago and was about the size of a modern trout – and heavily armoured, say scientists.

Encased in thick bone from snout to tail, it lacked a chin, fins and legs.

The foot long creature was a member of the “osteostracans”, Latin for “bony shells”, and had bizarre extensions at the front of its head.

Cephalaspis was a scavenger that sucked worms, algae and small crustaceans into its jawless mouth from mud and sediment by utilising water pressure.

The ancient animal has long been regarded as a lazy lump that spent most of its time resting on the seabed.

But Cephalaspis and its cousins were much more adept in the water than previously believed – turning human evolution on its head.

The experiments showed the strange spikes and spines that ornamented its skull were actually hydrodynamic adaptations.

They enabled the animal to passively generate lift from water currents flowing over its body.

The varying head shapes of different species allowed them to thrive in a variety of positions within the water – from high to low.

The groundbreaking discovery shows they were already ecologically diverse long before the arrival of jawed vertebrates.

Co author Dr Humberto Ferron, of the University of Bristol, said: “The evolution of jaws and fins have classically been seen as the key inventions that allowed vertebrates to diversify their lifestyles.

“In this context, jawless ancestors, characterised by the presence of heavy rigid headshields, were assumed to be cumbersome fish-like creatures, living on the bottom of rivers and seas, with poor manoeuvrability.”

The theory was they were driven to extinction because they could not compete with jawed vertebrates whose paired fins made them superb swimmers and predators.

The findings published in the journal Current Biology contradict the classical version of events by shedding fresh light on the osteostracans.

They achieved the feat by creating avatars of Cephalaspis based on fossilised remains unearthed across Europe and the US.

Co author Dr Imran Rahman, of Oxford University’s Museum of Natural History, said: “The application of computational fluid dynamics has allowed us to study the swimming performance of ancient vertebrates and learn more about their position in evolutionary history.”

Cephalaspis would have been prey for large arthropods of the time, such as monster sea scorpions.

To escape from being eaten, the fish evolved an early warning system.

Special sensors on their skin picked up even the tiniest vibrations in the water.

Here’s a brief history of life on our planet

When breeding season came, the creatures congregated in the one place they could escape the scorpions – inland fresh water with their convoy plowing upriver.

They returned to the spawning grounds where they hatched, using memory. Their toughened head had a vital weapon, one of the first complex brains.

It was much more developed than their rivals who had no memory at all, and allowed Cephalaspis to process information – and escape predators.

“Our results calls into question the prevailing view these extinct groups of jawless vertebrates were ecologically constrained.

“They reveal the main evolutionary hypothesis for the origin of jawed vertebrates is more complex than previously thought.”

In other news, newly discovered ancient teeth dating back 31,000 years are evidence of a new ethnic group in human history.

Ancient fossils have revealed that sabre-toothed tigers could puncture skulls with a single bite.

And, we’ve rounded up some of the most brutal ancient burial sites ever discovered.

What do you make of our mud-munching ancestors? Let us know in the comments! 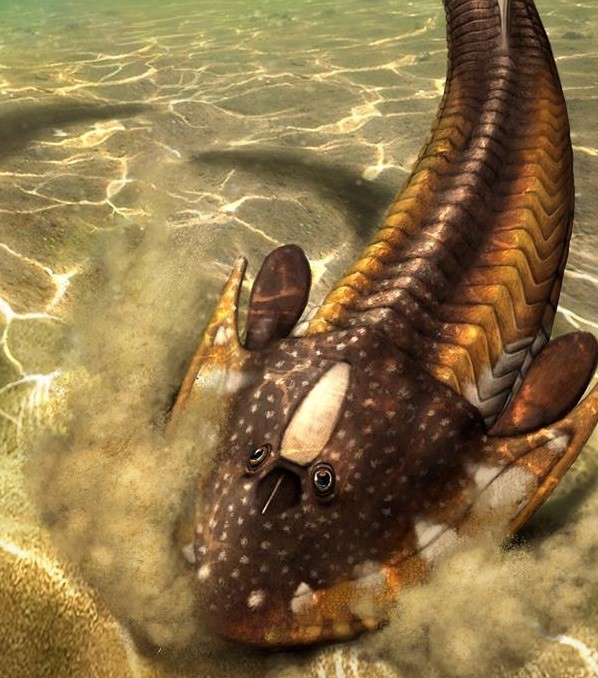 Your Sky box now has a fitness app...